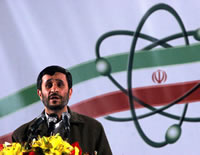 A year ago, Iran inaugurated its experimental uranium enrichment plant at Natanz. This facility is an underground site that, according to Iranian claims, houses 3,000 centrifuges. According to Israeli intelligence sources and foreign reports, Iran has encountered technical difficulties in connecting the centrifuges and operating them at high speed – which is imperative in order for the uranium enrichment procedure.

Natanz is a small quite tranquil mountain town located forty-nine miles from Kashan, famed for its bracing climate and fruit orchards. Vulture Mountain looms over the town, and local residents point in its direction telling how the troops of Alexander killed the Achaemenian King, Darius III, nearby. Many small shrines dot the mountain side like the Shrine of Abdas-Samad as shown below. The elements in the present complex date from 1304 with subsequent additions and restorations. The lofty minaret is dated 1325. The pyramidal roof is over the tomb of the Shaykh which is dated 1307. But near Natanz also exists one of the more dangerous places in the world, where in deep underground bunkers, Mahmoud Ahmadinejad’s nuclear scientists are at hard work to try and produce the Islamic doomsday weapon- Iran’s prestigious Shi’ite nuclear bomb. But how far is this frightening project really on its way to threaten world peace and especially Israel- which Ahmadinejad already officially targeted for extinction?

Sofar, world attention has focused on Iran’s uranium enrichment program. This process is far from being simplistic affair. Basic uranium enrichment involves increasing the concentration of fissile U-235 found in uranium, which must be enriched to about 3.5 percent for a controlled nuclear reaction, however weapons-grade uranium requires enrichment to over 90%. The entire process requires passing uranium through a series of centrifuges, which are 1.8cm-high spinning tubes creating centrifugal force separating the different uranium isotopes. By connecting 164 of the centrifuge machines together in a cascade, the gas is successively enriched in several individual stages, providing the basic module for an enrichment facility.

In early April 2006, Iran proudly announced that it had mastered the uranium enrichment process. By January 2007, Iranian scientists boasted their achievement claiming they came twice as fast as foreign analysts had predicted. Alas in their haste and almost reckless hurry proving this, the Iranians had skipped many of the intermediate testing steps. Bearing in mind that assembling 2,952 centrifuges (18 cascades) and getting them working together smoothly, would have taken some time – (experts estimate at least three years) which would include performing all the diagnostic, calibration and sustainability testing stages, each being a highly complex and sensitive process, it seems that Iran may have skipped these over, severely degrading this highly sensitive process.

Thus, not surprisingly, western intelligence sources reported on a series of mysterious malfunctions at Natanz apparently resulting from the supply of flawed components, probably purchased wholesale on the notorious A.Q. Khan’s black market. Some of these actually exploded upon their installation. At the time, there was no evidence that Iran was capable of mass producing its own nuclear-related components and thus was frantically searching suitable material on the world market. Since, they may have made some progress, but it seems highly likely that, due to more stringent sanctions enforced recently, the Iranians themselves might not know how well their domestically produced components will actually function and what technical problems they may still encounter in their attempt to produce a military grade nuclear device. The simple fact remains that in order to build a nuclear bomb, Iran needs to run its centrifuges continuously. But according to intelligence estimates, it seems that the Natanz centrifuges were running at best only 20% of the time!

Ahmadinejad’s repeated triumphant and provocative claim that Iran has joined the club of nuclear nations must be taken seriously, but at the same time be examined cautiously – based on known and estimated factual and realistic assessments.
President Mahmoud Ahmadinejad felt it necessary to claim, during his last year’s visit to the new underground Natanz enrichment facility that the Islamic Republic was already capable of uranium enrichment on an “industrial scale”, which being in direct contravention of United Nations resolutions, could be taken as an attempt to bluff the West.

That such claims should be treated as highly suspicious, warned an Israeli disarmament expert, Dr Emily Landau from the Institute for National Security Studies, quote: “I don’t think that it is really indicative of Iran being at that point of no return or a technical threshold where it can go it alone and start industrial-scale production.”
Israeli intelligence officials have cast great doubt on the veracity of Ahmadinejad’s repeated claims, but one should certainly not underestimate Iran’s technical skill. Nevertheless, a leading Israeli analyst, Gerald Steinberg Professor of Political Studies at Bar-Ilan University is more outspoken on this issue: “Ahmadinejad and the Iranian regime are bluffing,” the professor claimed recently, “Iran is indeed advancing, all the time, in its uranium enrichment project, but even once the centrifuges work as they should it would take a long time to produce the material needed for a nuclear bomb”. In fact other analysts argue that Ahmadinejad’s latest boast is more likely to be read as a political tactic than a statement of Iran’s technological capability.

President Ahmadinejad might still remain confident of continued backing from Russia, following Vladimir Putin’s recent “blitz” visit to Tehran, but his confidence could shatter, if a new understanding between Moscow and Washington, will erase the pending tension over Bush’s determination deploying his missile defense on Putin’s doorstep. Then an Iranian bomb threat could very much become Moscow’s nightmare, just like everybody else’s concern. The newly developing alliance between French President Nicolas Sarkozy and George W Bush, joining the Anglo-US anti-Iranian entity – could substantially encourage the hesitating anti-Shi’ite Crescent, led by Saudi Arabia and other moderate Sunni nations-all deeply concerned by the Shi’ite bomb threat from Tehran. No doubt that Ahmadinejad, who might be seen, superficially as a rhetoric madman, but is no fool – may already be losing some sleep over the newly developing trend, which is already shaping up by his Sunni adversaries. If pressure will be building up in New York’s UN Headquarters and Russia takes another direction- the Peoples Republic of China, might also take another step in blocking Iran’s nuclear ambition, perhaps before it is too late to avert another military conflict, with its inevitable global repercussions.

But there is another angle to Ahmadinejad’s reckless bravado rhetoric: With the Iranian economy tottering and growing criticism within senior circles in Teheran on his reckless diplomatic conduct, Ahmadinejad’s grip on power seems far from firm.
Mr Ali Larijani unexpected resignation from the dominant position of Iran’s chief nuclear negotiator and the secretary of the Supreme National Security Council and a personal friend of Grand Ayatollah Ali Khamenei, left the Iranian political system in a state of shock. Several important politicians, including Ahmad Tavkoli, the head of Majles’ Research Center, and Mohsen Rezaie, the Expediency Council’s secretary, have already expressed their concern and unease about Larijani’s resignation as well as his replacement by a novice, Saeed Jalili, Ahmadinejad’s close associate. This latest move has already raised questions regarding Ayatollah Khamenei’s sofar undisputed control over the nuclear file which could well unsettle the already shaking domestic political scene.

There are already rumors in Tehran over growing uneasiness among political heavyweights, led by Ayatollah Akbar Hashemi Rafsanjani, joined by Mohammed Khatami, Hojjat ol-Eslam Mehdi Karroubi and now Ali Larijani. Analysts believe that it may still be too early to predict an upsurge of Ahmadinejad’s regime, at least as long as his former mentor Khamenei decides to support him. But even the Grand Ayatollah may already be losing his patience with his younger protégé, who may well be viewed as wielding too much ambition for total power, in the still clerical-dominated establishment. Another outspoken opponent of Ahmadinejad is Grand Ayatollah Hossein Ali Montazeri, an architect of the 1979 Islamic Khomeni revolution, who recently criticized the president’s handling of Iran’s nuclear policy- warning that in order to avoid a catastrophe; the nuclear issue should be resolved through direct negotiation with Washington.

Meanwhile in Israel in a briefing to the Knesset’s Defense and Foreign Affairs Committee Tuesday, Brigadier General Yossi Baidatz, head of research at Military Intelligence, updated senior government officials on the strength of Israel’s foes. According to press reports, the brigadier-general indicated that Iran’s current regime is not in actual danger of collapsing and may even go nuclear by the end of 2009. However this doomsday prophesy is disputed by other intelligence assessments, which consider several more years for Iran’s nuclear weapons operational capability to extend for at least into the next decade.

General Baidatz’s comments may have been directed at secret information, indicating that Iran is engaged in secret production of plutonium for nuclear weapons as well as radioactive materials for a “dirty bomb”, in parallel to its uranium enrichment projects. Sources indicate that Israeli intelligence has monitored this dangerous trend for over three years. Israeli intelligence sources reported that these developments could throw new light on the role of the Iranian heavy water plant at Arak, whose capacity to produce plutonium places it at the center of Iran’s alternative nuclear program. Intelligence reports indicating Iran’s efforts to buy a large heavy-water reactor had already set off alarm bells. It is well known that when adequately reprocessed, fuel rods irradiated in such reactors could yield high-quality, weapons-grade plutonium. Experts estimate that when the Arak reactor is completed, which the Iranians say could happen as early as 2009, it will be capable of producing enough plutonium for about two bombs a year. This could well be what the Israeli officer hinted at.

While the nuclear threat from Tehran must be taken with utmost caution and strategic foresight, certainly not all in Israel are overmuch concerned by Ahmadinejad’s provocative bravado speeches.

Professor Martin van Crevelt, one of Israel’s most prominent military historians, claims that Ahmadinejad’s fulminations should not be taken too seriously, as the Islamic Republic will not even be an existential threat to Israel. The latter has long had what it needs to deter an Iranian attack. But should deterrence fail, van Crevelt warns, “Jerusalem can quickly turn Tehran into a radioactive desert – a fact of which Iranians are fully aware“. Efraim Halevi former Mossad chief and Israel’s National Security Committee also stated categorically that “Israel cannot be destroyed for many reasons, some of which are known and others you can presume“, stressing that “There is a chance that something serious will happen here, but I tend to say the following when I am abroad: Israel cannot be destroyed. If you do not believe this, then don’t, but I suggest that you do not try it.” In other words – President Mahmoud Ahmadinejad should be warned against taking his sofar rhetorical bravado, into action-one step too far.