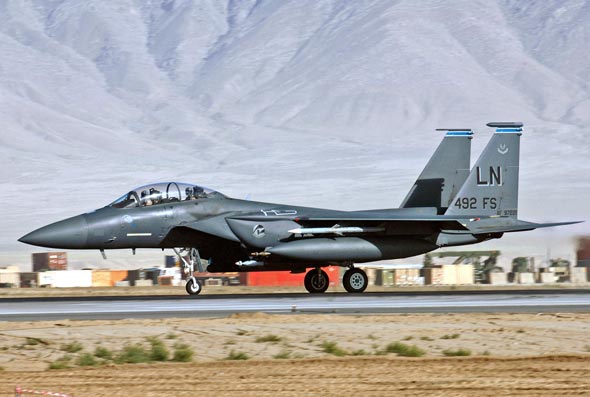 The Boeing F-15E Strike Eagle is a dual-role fighter designed to perform air-to-air and air-to-ground missions. An array of avionics and electronics systems gives the F-15E the capability to fight at low altitude, day or night, and in all weather. The aircraft has a crew of two – pilot and weapon systems operator. Its avionics suite include an advanced multi-mode air/air/ air/ground radar (APG-70), navigation system based on laser gyro, and an electro-optical targeting system (Originally equipped with LANTIRN, the Strike eagle recently received the Sniper Advanced Targeting Pod). The aircraft retained the LANTIRN’s radar navigation pod, to provide low-altitude terrain following flight at night and under difficult visibility conditions.

The F-15E is the US Air Forces’ combat command’s ‘platform of choice’ for new capabilities is the F-15E. This aircraft is currently suited to carry Joint Direct Attack Munition (JDAM), Joint Air to Surface Strike Missile (JASSM) and Small Diameter Bomb (SDB). The Strike Eagle can carry 20 SDBs which can be targeted individually to attack different targets.

A near-term capability enhancement planned for the SDB is the use of ‘Focused Lethality Warheads’, which will further reduce the risk of collateral damage and enable shorter safety margins for attack. In the longer term, a new radar (most probably a variant of the APG-63V3 AESA radar will replace current APG-70 radar as part of the Eagle’s Radar Modernization Program (RMP).

In the following pages, Defense Update reports how the USAF plans to maintain its ‘Shooters’ effective for years to come.