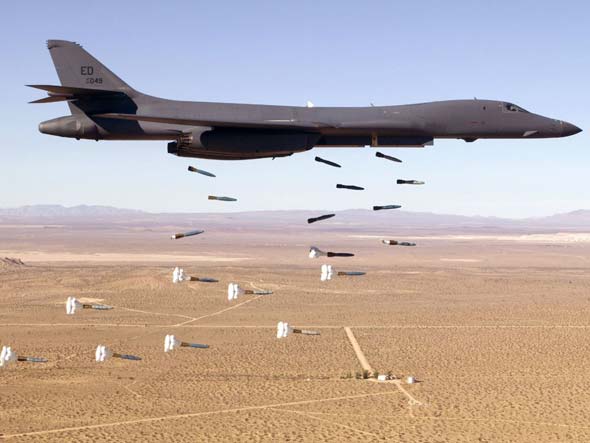 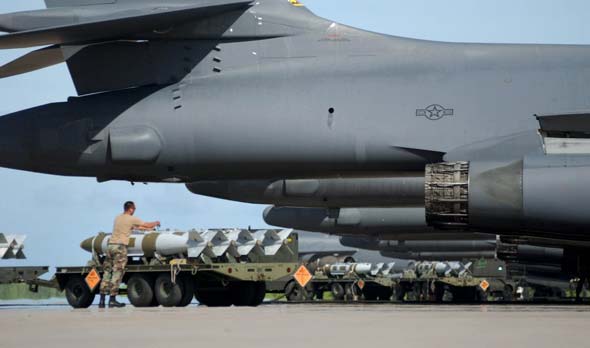 The B-1B Lancer is emerging as a transformational weapon system, not because of its nuclear attack capability but due to its ability to strike time-sensitive targets anywhere in the world, and engage several targets simultaneously with conventional, highly accurate weapons. The Lancer can patrol over a target area for several hours, waiting to respond to targets of opportunity, as they are spotted by intelligence sensors. The employment of stand-off weapons, such as JASSM stealth cruise missiles enables these bombers to operate beyond the reach of conventional air defenses.

By 2008 the USAF plans to equip the B-1B with up to 24 JASSM-Extended Range stealth cruise missiles, further extending its standoff strike range beyond 500mn. When tasked with time-sensitive target engagement missions, individual bombers can be “stacked” over a specific area, for rapid response to emerging opportunities. The Lancer can carry a total load of 24 GPS-guided Joint Direct Attack Munitions (JDAM) or JASSM missiles. The bomber’s new avionics upgrade suit provides tight integration between the GPS and the SAR radar and Ground Moving Target Indicator radar to improve the situation awareness inside the airplane.

The development and procurement of JASSM-ER is a key element of the B-1B reinvestment strategy. The additional range provided by the JASSM-ER missile benefits the B-1B with responsive, precision-engagement capability while remaining clear of highly defended airspace and beyond the range of long-range, surface-to-air missiles. A primary JASSM-ER program objective is to provide the warfighter with a significant operational capability benefit of greater than 2.5 times the increase in missile range, while maintaining the same outer mold line, reliability, survivability and lethality of the baseline JASSM missile.

As part of the Conventional Mission Upgrade Program (CMUP), the B-1B is undergoing avionics upgrades in several phases. The most recent phase, concluded in September 2006, was Block E modifications, which comprised the replacement of six computers with four, providing a 25-fold increase in throughput, memory and input/output margins required to add flexible targeting for the use of multiple conventional weapons in a single sortie. The new package supports the Wind-Corrected Munitions Dispenser (10 per bay or 30 per aircraft), the Joint Standoff Weapon (four per bay, 12 per aircraft) and the Joint Air-to-Surface Standoff Missiles (24 per aircraft). Other improvements included integration of advanced communications “Connecting the airplane into the Global Information Grid will provide combat commanders with a potent long-range strike capability for decades to come.” said Greg Burton, Boeing director for B-1 and B-2 programs.

The installation concluded the third phase of the Conventional Mission Upgrade Program (CMUP) undertaken in 1993 to convert the B-1 from a nuclear to a conventional role. A small number of CMUP-equipped Lancers delivered more tonnage of ordnance while flying fewer sorties than any other aircraft during Operation Iraqi Freedom. CMUP also added 1760 smart weapons bus to the B-1B arsenal, improving the flexibility of loading and launching multiple types of weapons against a wider target set. In 2007 Boeing was awarded $45 million to continue avionics upgrades on the B-1B bomber fleet.

Following is a brief introduction of recent and future upgrades planned for introduction in current B-1Bs, as part of the USAF plan to maintain its ‘Shooters’ effective for years to come.

Other upgrades are sometime based on ‘non-traditional’ approaches. For example, air force units engaged in combat which are requested to wait for video datalinks for their targeting pods, opt for makeshift upgrades, strapping a datalink from a Raven mini UAV to the pod. The result may be less than optimal but nevertheless do the job. A similar, yet more ordinary approach was implemented with the B-1B Bomber, which also received a Sniper targeting pod. To accelerate the pod introduction, the pod bypassed the central avionics, and is controlled directly from a laptop. Other improvements to this bomber include avionics systems considered baseline in today’s fighters, such as a data transfer system (DTS), Fully Integrated Datalink (FDL).

Since the early 2002s a growing share of the B-1B missions are conventional attack missions, following the CMUP undertaken by Boeing in 2002. As an active participant in all major US military operations since the Gulf War, B-1B bombers have delivered more tonnage of ordnance while flying fewer sorties than any other aircraft during Operation Iraqi Freedom.