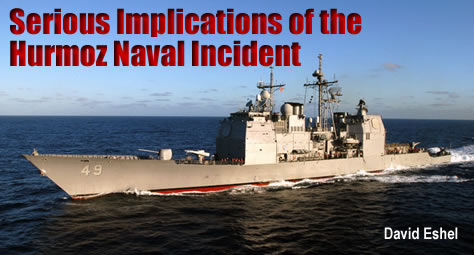 At 08:00 am local time on Sunday as a US Navy cruiser, destroyer and frigate were on their way into the Gulf when they were buzzed by the speedboats, which dropped several unidentified boxes in the water in front of them. Five Iranian Revolutionary Guards Corps Navy (IRGCN) speedboats then made threatening passes against three US Navy vessels passing the strategic Strait, at the mouth of the Persian Gulf which is one of the world’s most sensitive strategic choke points, with at least a fifth of the world’s crude oil supply passing through it.

Mid East sources warned that the near-shooting provocation, was timed precisely by Tehran for the eve of President George W. Bush’s Middle East tour. A Pentagon official said that US forces were “literally” on the verge of firing on the Iranian boats and had moved to man their guns when the Iranians turned and sped away.

This is how the US Navy Serious Implications of the Hurmoz Naval Incident described the incident: “Following a routine transit through the Strait of Hormuz, Jan. 6, three U.S. Navy ships operating in international waters in the Persian Gulf were approached by five Iranian small boats that demonstrated irresponsible confrontational behavior near the U.S. ships.

The U.S. Navy formation included U.S. Navy ships USS Port Royal (CG 73), USS Hopper (DDG 70) and USS Ingraham (FFG 61) were sailing i bound the Gulf via the Strait of Hormuz on a routine transit. U.S., sailing about three nautical miles outside the 12 nm off Iran’s territorial waters. “The five Iranian boats approached the formation on the formation’s starboard bow in international waters slightly inside the gulf from the apex of the strait, broke into two groups, one to one side of the formation, one to the other. The groups maneuvered aggressively in the direction of the U.S. ships.” 5th Fleet Vice Adm. Kevin Cosgriff told reporters at the Pentagon yesterday. He added that in some situations, the Iranian boats were closing up to a distance of 500 yards from the U.S. ships. Following standard procedure, Hopper issued warnings, attempted to establish communications with the small boats and conducted evasive maneuvering. The whole incident lasted about 30 minutes. “The behavior of the Iranian ships was, in my estimation, unnecessary, without due regard for safety of navigation and unduly provocative in the sense of the aggregate of their maneuvers, the radio call and the dropping of objects in the water.” said Adm. Cosgriff. He added that the U.S. crews “stepped through the procedures carefully, with good discipline, with due regard for all the factors, while at the same time taking the reasonable precautions to place their ships in conditions of readiness consistent with the environment in which they were entering… we take the potential for a small craft to inflict damage against a larger ship seriously, and we would be irresponsible if we didn’t” Adm. Cosgriff concluded.

Coalition vessels, including U.S. Navy ships, routinely operate in the vicinity of both Islamic Republic of Iran Navy and IRGCN vessels and aircraft. These interactions are always correct on the U.S. part and reflect a commitment to accepted tenets of international law and common practice.” On the other side, Iranian Foreign Ministry spokesman Mohammad-Ali Hosseini referred to the incident as “something normal”. “The case happening on Saturday was similar to the past ones and it was a regular and natural issue” he told Iranian news agency IRNA. ” according to Hosseini, such incidents are routinely settled after identification of the two parties.

Sunday’s incident was the most serious, since the Revolutionary Guard’s seizure of eight Royal Navy sailors and seven Marines from the HMS Cornwall last March in the Shatt al-Arab waterway in the Gulf.

The U.S. Navy has determined that Iran has amassed a large fleet of fast patrol boats along the 43-kilometer straits, with headquarters based at Bandar Abbas naval port. Iran’s Islamic Revolutionary Guard Corps, responsible for strategic programs, which leads the effort. The vessels, armed with cruise missiles, mines, torpedoes and rocket-propelled grenades, are up to 23 meters in long and can reach a speed of 100 kilometers per hour. This marks the implementation of Iran’s “swarm” program, where dozens of armed speed boats attack much larger naval vessels from all sides, an official said. Specially trained elite crews are on high alert stand-by status to move on orders. Sunday’s foray was probably testing US naval combat efficiency, which, when it quickly responded, caused them to break contact and withdraw. By learning US naval tactics and reaction timing, the IRGC will no doubt adapt and apply new tactical approaches in future attempts.

In 2005, IRGC developed its swarm doctrine following Teheran’s assessment that the United States was considering an air strike on Iran’s nuclear facilities. Officials said the swarm doctrine was designed to exploit the slow pace of U.S. aircraft carriers and destroyers in the shallow waters of the Gulf.

IRGC swarming tactics envision a group of more than 100 speedboats attacking a target, such as a Western naval vessel or a commercial oil tanker. They said 20 or more speedboats would strike from each direction, making defense extremely difficult.

The Navy, with at least two carrier groups in the Gulf, has been developing counter-measures to an Iranian swarm attack. These include using minesweepers, unmanned aerial vehicles to monitor Iranian speedboats and the deployment of weapons that could blast Iranian speedboats at standoff range.Such exercises have been conducted over the past few months.

The Persian Gulf saw several US Navy-Iranian Navy engagements in the past. On April 18, 1988 during Operation Praying Mantis the navy sank no less than six armed Iranian naval vessels in a short offshore battle.

On the morning of July 3 USS Vincennes, an American Aegis guided missile cruiser, mistakenly shot down an Iranian civilian airliner over the Strait of Hormuz, killing all 290 passengers and crew. The commercial flight had taken off from Bandar Abbas, which served dual roles as airbase for Iranian F-14 operations and as a hub for commercial, civilian flights Vincennes fired two SM-2MR Surface-to-air missiles which both hit Flight 655, which exploded, killing all on-board.

On October 12, 2000 the USS Cole, was hit by a small explosive speedboat manned by Al Qaeda terrorists, coming from Aden Port OF Yemen, which approached the port side of the destroyer, and an explosion occurred, putting a 35-by-36-foot gash in the ship’s port side Seventeen sailors were killed and thirty nine others were injured in the blast.

Whether Sunday’s incident will remain a single test case is questionable. As tension raises constantly in this highly sensitive region, all options are open.