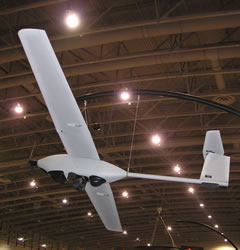 Lockheed Martin unveiled the latest mini UAV model called Stalker, developed at the Advanced Development Programs (also known as the famous Skunk Works). Stalker was developed in 2006 to address specific requirements raised by US Special Operations forces and made its first flight in mid 2006. Designed to be carried and operated by an individual soldier, the hand- launched mini UAV weighs 6 kg and has a wing span of 3 meters. The system includes hand held mission control system and communications module that can control up to four vehicles simultaneously.

Stalker can carry payloads of up to 3 pounds on a two hour mission at ranges of up to 20 km. The mini UAV is equipped with a specially designed EO payload comprising of a retractable stabilized pan and tilt mount, which can be fitted with different modules containing specific payload, such as daylight (TV) camera, low-light TV, an uncooled thermal sensor or a combined sensor and laser target market. The dual-axis stabilizes payload is mounted under the belly and is retrieved before landing. It is also protected by special shock absorber pad. Stalker typically operates at altitude of 400 above ground and can be used up to 15,000 ft above sea level.

With a lightweight, stealthy design and very low acoustic signature derived from the extended assembly designed for the electrical motor, Stalker is claimed to be uniquely quiet, making it highly suitable for spec-ops role. The autonomous vehicle is designed to operate under difficult weather conditions, at winds up to 30 knots (although it was demonstrated to be usable in winds up to 50 kt). Launched by hand, Stalker is designed for automatic retrieval over any terrain, without a parachute, by using deep stall and specially designed shock absorbing belly. The mini UAV will autonomously return and land in area up to 50 feet from its designated landing point.