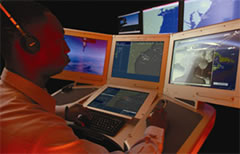 COMBATSS-21, developed by Lockheed Martin is a new core combat management system developed for the Littoral Combat Ship (LCS-1). The system integrates the sensors, weapon systems, communications, processing and display systems including the radar, gun weapon system, missile launchers, decoy launchers, and electronic warfare systems. The system were integrated for the first time on board USS Freedom in June 2008, validating the open architecture with both COMBATSS-21 and Freedom itself. During the integration testing, targets of opportunity were engaged and tracked to demonstrate operability. The system’s core functions are employed as baseline, with additional user-defined specific mission packages. The initial package developed by the U.S. Navy is the Surface Warfare Mission Package (SUP). The second is the anti-submarine warfare was tested in August 2007. SUW MP was recently tested in integration with the ship’s stabilized 30mm Mk46 gun and sensors, demonstrating rapid detect, track and prosecution of small-boat threats. The system is also designed to protect local assets and move a force quickly through a strategic waterway. On coastal attack missions, the vessel could employ the Non Line of Sight – Launch System (NLOS-LS) to fire precision attack missiles. It also interfaces with two Vertical Takeoff and Landing Tactical Unmanned Aerial Vehicles (VTUAVs) and a MH-60R helicopter carried on board. COMBATSS-21 was built through a high degree of reuse from the Aegis Weapon System, enabling cost effective updating throughout the US Navy surface fleet. The system is part of a common product library that delivers to Aegis, LCS, the U.S. Coast Guard’s Deepwater program and international navies. The system is designed to be exportable to international navies considering operating the LCS, among them Israel and Saudi-Arabia.