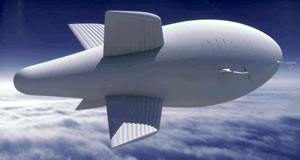 The Integrated Sensor Is Structure (ISIS) developed by Lockheed Martin Aeronautics. ISIS will provide a new model for persistent, autonomous ISR platform. Utilizing a stationary stratospheric airship, ISIS will establish a position on the ‘high ground’ at an altitude of 70,000 ft. This airship will be deployed for long missions, staying in position for one, five or even ten years.

The airship structure will be integrated with lightweight, phased-array radar antennas, providing highly accurate and sensitive sensor capable of detecting ground-bound and airborne moving targets under all weather conditions. ISIS will provide a persistent early warning sensor able to detect cruise missiles at distances of 600 kilometers or dismounted enemy combatants at a range of 300 km. Exploiting its huge size, ISIS will utilize its large aperture instead of high power to meet the radar performance requirements.

To generate power for the systems on board, the outer skin of the airship will be coated with solar cells, absorbing the sun light as well as light reflected from the earth surface, thus minimizing power drainage at night. The airship program is currently funded by DARPA and could be matured for deployment toward the end of the next decade (around 2018).