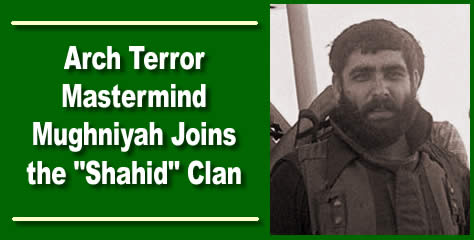 The Middle East, from Beirut, Damascus and to Tehran is in severe shock. Hezbollah’s top military commander and one of the world’s most notorious terror masterminds, died in a mysterious car bomb explosion in the Damascus district of Tanzim Kafr Susa on Tuesday night. For almost three decades, this man has been a fugitive from the world’s leading intelligence services.

Imad Mughniyah, was more than just a senior Hezbollah official. Western intelligence experts and foremost the Israeli defense establishment, consider him to be the actual founder of the “new” Hezbollah, reshaping it from a small terrorist organization, into a second-to-none well equipped and highly trained, guerilla army, operating along totally new warfare tactics, which culminated in last summer’s Second Lebanon War against the IDF. Even Winograd report, although hardly mentioning his name, gave Hezbollah under Mughniyah’s leadership high marks.

Imad Fayez Mughniyah, 45, orchestrated the suicide bombings of US Marine and French Beirut headquarters, in 1982 which killed 241 Marines and 58 French soldiers, in the aftermath of Israel’s invasion into Lebanon. One year later, Mughniyah planned the US embassy bombing, killing 63 people and wiping out the entire top CIA Middle East staff. In 1985, he shocked the world’s headlines, in the widely publicized hijacking TWA Flight 847 and the cold blooded murder of U.S. Navy diver Robert Stethem, a passenger on the plane. The United States placed Imad Mughniyah on the top of the “Most Wanted Terrorists”, but was unable to capture him, in spite of ceaseless efforts. Mughniyah became infamous for numerous brutal kidnappings of Westerners in Beirut during the 1980s, most notably, that of, former Vietnam veteran and journalist, Terry Anderson and U.S. Army Col William Francis Buckley, who was later murdered.

Iran in particular, regarded Mughniyah as a crucial, even strategic asset. He enjoyed the rare and complete personal confidence of both Iranian supreme ruler Ayatollah Ali Khamenei and al Qaeda’s Osama bin Laden. But the dead terrorist’s association with Tehran and its violent overseas exploits went back twenty years. In 1988, in collusion with Tehran, he organized the kidnapping of US Marine Corps Lt. Colonel William R. Rich Higgins, the most senior American intelligence officer in Lebanon, who was tortured to death by Iranian Revolutionary Guardsmen and Hezbollah operatives.

Senior enough to take orders from no-one ranking lower than Iran’s supreme ruler, Ayatollah Ali Khamenei, Mughniyah operated directly through the top Revolutionary Guards commander General Rahim Safavi. Intelligence sources in the West and in particular the Israeli military had a high opinion of Mughniyeh’s military, intelligence and tactical skills. His hand was seen in the transformation of al Qaeda’s 2001 defeat in Afghanistan into a launch pad for its anti-US campaign in Iraq and many other ventures in the terror war against America. After the death of Abu Musab al Zarqawi, Mughniyah was rated the world Islamic terror movement’s most outstanding field commander. His part in causing the Israeli Army so much problems during last years summer war, was decisive. In fact, Mughniyah was high on Israel’s target list during the war. Israeli military intelligence had assessed that he could have been killed in a massive air strike on the movement’s headquarters in the Beirut Dahya neighborhood on July 19, but he escaped, miraculously, as he did during his “nine lives” survival.

Israel has a long list of accusations on Mughniyah. According to Yossi Melman, senior analyst in Haaretz daily, “If there is a definition for the term “the snake’s head,” it is Imad Mughniyah, who started his terrorist activities as a militant with Fatah, and joined Hezbollah afterwards with the establishment of the Shi’ite organization. If Israel is behind this act, it can be seen as the most significant intelligence accomplishment in the war on terror, coming before the assassination of Fathi Shikaki, leader of the Islamic Jihad in 1995″.

In the past, in the 1990’s, according to foreign reports, the Mossad tried to assassinate him in a complex operation in southern Beirut. However, the operation killed his brother, a car shop owner in Beirut. Mughniyah was expected to be present at the funeral, giving an additional chance to assassinate him, but he never showed. The United States also tried to detain Mughniyah several times, including a 1995 attempt to arrest him when the plane he was traveling was due to stop in Saudi Arabia. Diplomats said Saudi officials refused to allow the plane to land. Several more attempts also failed.

Former Mossad head retired Major General Danny Yatom said on Israel Radio. “He was one of the terrorists with the most amounts of intelligence agencies and states chasing him. Mughniyah had been a very tough target to track”, he said, describing his death as a severe blow to Hezbollah. “He behaved with extreme caution for many years. It was impossible even to obtain his picture. He never appeared or spoke before the media. “His identity was hidden. His steps were hidden. He behaved with extreme caution, and that was the reason it was difficult to get to him for so many years.”

Whoever tracked Mughniyah down in Syria had excellent operational and intelligence capabilities, something that was lacking in the Second Lebanon War. Although naturally Hezbolla, Damascus and Tehran immediately blamed

Israel behind the assassination, Mughniyah had enough enemies in his own camp to wish him “join his forefathers!” For some of the second level leadership, Mughniyah was growing too strong even to challenge Hassan Nasrallah’s sofar unique prestige, which waned somewhat after the Tehran Ayahtollah’s blamed him for destroying their forward base last Summer, in his reckless abduction. (A recent photo of Mughniyah, released by Hezbollah after his death is shown on the left.)

In fact, only a few days earlier, the leader of Lebanon’s Druze community, Walid Jumblatt, used a televised address, to hundreds of cheering supporters on Mount Lebanon, to make a speech which was not only a virtual declaration of war on the Shia militia Hezbollah but also at times contradictory. Only a few days before a mass rally is to be held Thursday on the third anniversary of the assassination of former Prime Minister Rafiq al-Hariri, such speeches are generally used to attack the governments in Tehran-Damascus which carried out the assassination. Jumbalat’s head-on attack on Hezbollah could inflame tempers, which are already simmering into dangerous proportions between Shi’ites and Sunnis in Lebanon. Lebanese security forces are expecting some high tension in Beirut, during Mughniyah’s funeral in Hezbollah’s stronghold Dahya quarter and on the streets of the capital itself. Things could easily get out of control and even escalate into a renewed civil war.

The immediate question, however, is whether or not Hezbollah or Iran will respond to the assassination with terror attacks in Israel’s north or overseas. For example, following then Hezbollah leader Sheikh Abbas Musawi’s assassination in 1992, Mughniyah responded with the notorious attack on the Israeli embassy and in 1994 against the Jewish community center in the Buenos Aires. In these terror attacks, more than 100 people were killed.

While Israel officially denied any part of its involvement, which is quite rare in itself, the Defense community has elevated the alert on its Lebanese and Syrian borders, at airlines, embassies and Jewish institutions world wide. Security has been stepped up for prominent Israeli and Jewish figures, including defense minister Ehud Barak, who were already targeted by Hezbollah.