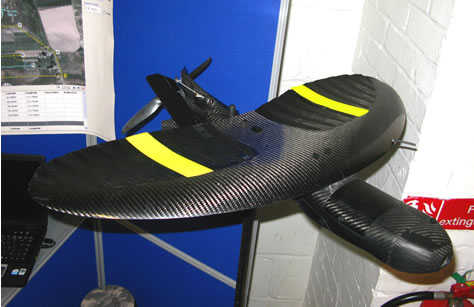 At AUVSI 2008 Prioria Robotics, Inc. launched a new version of the MAVERIC. A small system, carried and launched by a single-person, Maveric operates as an autonomous UAS, controlled by Peoria’s Merlin operating system which has unique collision avoidance capabilitiesdesigned into its embedded-vision navigation. Another unique feature of the Maveric is its bendable, carbon fiber wings, allowing storage in a six-inch tube and deployment in less than two minutes with no assembly.

The airframe is manufactured from lightweight composite materials.

These algorithms improve the vehicle’s performance in obstacle-saturated airspace, as in urban area, or in dense woodland. Other skills available in the maverick include target tracking, target identification and precision collision (guided strike).

The Maveric weighs only two pounds fifty and is designed to carry a payload weight of 200 grams; standard payload includes a forward looking color video camera and another, side looking sensor accommodating either video or IR camera.At AUVSI 08 the company unveiled two redesigend versions of the Maveric, the Maveric 100 equipped with fixed camera and the ‘150, carrying a retractable gimbaled payload and forward looking fixed camera.

The bird shaped Maveric weighs about 2.5 pounds and is powered by an electrical motor which is inaudible beyond 100 meters. It can fly missions of up to 50 minutes at a speed of 35 mph, or maximum airspeed of 60 mph, at altitudes of 50 – 25,000 ft. Maximum range is 27 km. At the end of its mission, Maveric will return to a predetermined point for skid landing. 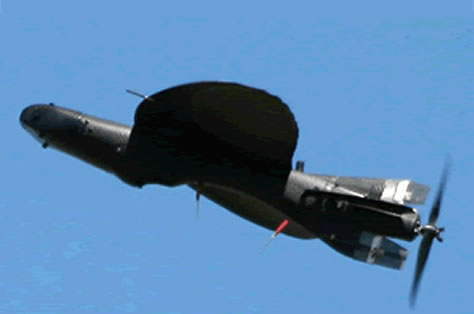