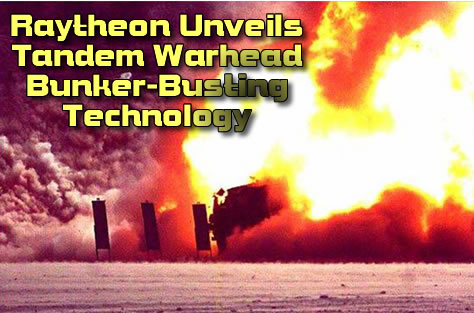 The new tandem warhead consists of a shaped-charge precursor warhead combined with a follow- through penetrator explosive charge. Raytheon engineers believe Tandem Warhead System, which is lighter and more powerful than current conventional systems, is suited for weapons with long standoff range and greater survivability against enemy threats.

“Bunkers are getting harder and deeper, and high-value ones are extremely well protected,” said Harry Schulte, Missile Systems’ vice president, Strike product line. “The warfighter has a need for increased capabilities against this challenging target set, but because conventional warheads in the inventory can’t meet this requirement, Raytheon self-funded the development of this new warhead.”
“Now that we’ve demonstrated it’s possible to create a conventional warhead that weighs approximately 1,000 pounds and provides unmatched capability, we’re looking at scaling the technology,” Schulte said. “We believe we can place a warhead that uses this new technology on any strike weapon system in the inventory in 18 months or less.”

According to Schulte, innovative engineering techniques enabled Raytheon’s engineers to take the warhead from the drawing board to the proving grounds in fewer than nine months.