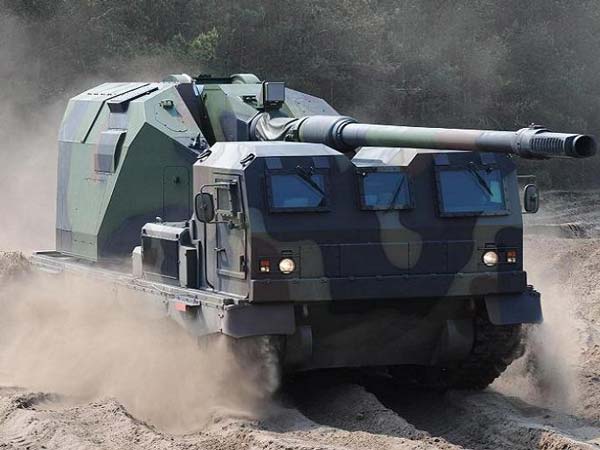 Krauss-Maffei Wegmann (KMW) developed the Autonomous Gun Module (AGM), a modular, air transportable unmanned turret which can be installed on various land based and naval platforms. Weighing 12.5 tons, the AGM turret is self contained with a 155mm /39 Caliber gun, automatic loading system and a supply of 30 projectiles and a corresponding amount of charge modules. The AGM fits the dimensions and weight to provide operational mobility with the future A400M transport aircraft. The first AGM system demonstrator has already been implemented on the MLRS chassis which is in service with many NATO countries. The total weight of an MLRS deployed self propelled AGM is 27 tons. AGM uses automatic gun aiming and autonomous loading system, ramming the shell and charges required for the mission. During recent test firings, the system demonstrated a rate of fire of six rounds per minute.

In June 2008 Krauss-Maffei Wegmann (KMW) and General Dynamics European Land Systems (GD ELS) announced a teaming agreement to develop and market a new self-propelled gun called Donar, based on the AGM. The chassis made by GDELS’ is derived from the ASCOD 2 infantry fighting vehicle. A crew of two soldiers (a driver and a commander) operates the entire system from a highly protected driver cabin, increasing survivability and allowing for extremely rapid fire and movement maneuvers. The system, named Donar weighs less than 31 metric tons, allowing it to be transported in the future European Transport Aircraft A400M. A first prototype has already undergone mobility and fire trials at the test facility of the German procurement agency BWB (Bundesamt für Wehrtechnik und Beschaffung). Donar will be unveiled this month at the Eurosatory 2008 exhibition in Paris, France.