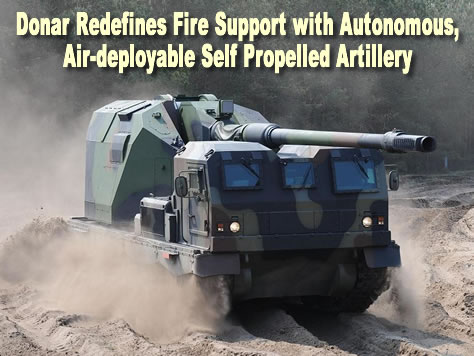 The system, named Donar, utilizes the Autonomous Gun Module (AGM) system developed by KMW. The total system weighs less than 31 metric tons, allowing it to be transported in the future European Transport Aircraft A400M. The self propelled gun operates as an autonomous weapon system, enabling a single barrel to create the effect previously achieved by a whole battery. It is designed to be air-deployable in the future A-400M tactical airlifter. Furthermore, the system will offer considerable logistical benefits including reduction in crew and logistics requirements. The system is targeted to replace heavier self propelled guns such as the M109, AS90 and K9 currently in service with modern armies. A first prototype has already undergone mobility and fire trials at the test facility of the German procurement agency BWB (Bundesamt für Wehrtechnik und Beschaffung). Donar will be unveiled this month at the Eurosatory 2008 exhibition in Paris, France.

The unmanned turret accommodates a remotely operated, auto-loaded 155mm (52 cal.) cannon, the same cannon used in the German Army’s PzH2000 self propelled gun. This weapon can fire at a maximum range of 56 km. The turret carries 30 ready to fire fuzed 155mm shells and charge modules. According to KMW, despite a marked reduction in weight and size, the gun module is operational without any additional stabilization and provides a 360-degree azimuth range.

The chassis made by GDELS’ is derived from the ASCOD 2 infantry fighting vehicle. A crew of two soldiers (a driver and a commander) operates the entire system from a highly protected driver cabin, increasing survivability and allowing for extremely rapid fire and movement maneuvers. A prototype of the AGM system developed by KMW used a lighter chassis derived from the MLRS, contributing to a total system weight of 27 tons. However, the current version is offering better mobility and protection.