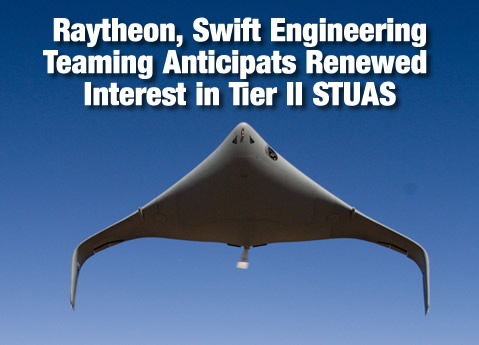 Raytheon Company (NYSE:RTN) and Swift Engineering, Inc. announced the renewal of their teaming agreement in pursuit of the forthcoming U.S. Navy/Marine Corps Tier II/ Small Tactical Unmanned Aircraft System (STUAS). Two years ago the two companies teamed to compete for an earlier phase which was pushed back by the corps at least untill the next year.

“KillerBee offers the warfighter an affordable unmanned aircraft system, and the Swift Engineering vehicle has both longer endurance and the ability to carry a larger payload,” said Ken Pedersen, Raytheon vice president of Advanced Programs. He noted that the team will offer proven technology to facilitate rapid fielding of the KillerBee in the near term. The KillerBee uses blended wing body design which sets it apart from similar sized unmanned aerial vehicles and is designed to operate ashore or aboard ships with a minimal footprint.

Through extensive air and ground testing, Swift claims that KillerBee has demonstrated performance outperforming any vehicle in its class. Control, processing and display functions were validated, and demonstrated suitability for naval and marine corps applications. The companies plan to continue flight testing throughout 2008, to ensure matured readiness level of the entire KillerBee system. Ongoing flight tests have demonstrated the integrated architecture that includes the hosting of the vehicle specific module in the aircraft mission computer, further validating the STANAG 4586 architecture, and the KJ-640 electro optical-infrared sensor system.