The US Navy and US Marine Corps have decided to delay the tactical-level unmanned aircraft system program for a year, splitting the program into two separate phases, the first to begin in the first quarter of fiscal year 2009. Industry teams preparing for the tender, originally expected in the fall of 2007, will now re-evaluate their plans to address what seems to be a much larger program, aiming at the acquisition for thousands of new air vehicles over the next several years. In addition to US Marine Corps and US Navy uses, the new program is also expected to address US Air Force requirements for base protection. 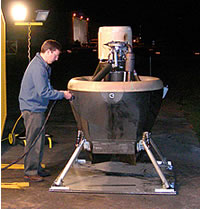 The Navy and USMC plan to launch the program in 2008, with a baseline day/night imaging and target designation capability, similar to what the Boeing/Insitu Scan Eagle system is providing today. The Air Force program will follow by 2010 primarily addressing base security mission. In addition to standard EO payloads, these aircraft could also be equipped with acoustic sensors, to spot gunshots and other threats.

Companies that considered competing for the program include the Boeing/Insitu team, offering the Scan eagle, Raytheon, offering the Killer-Bee from Swift Engineering, AAI offering the Australian Aerosonde and MTC Technologies, offering the SpyHawk, designed by Arcturus. Northrop Grumman and Aurora Flight Sciences teamed to offer the Golden Eye 80 ducted-fan UAS and Israel Aerospace Industries prepared to offer its I-View 50 system with yet unnamed local partner.