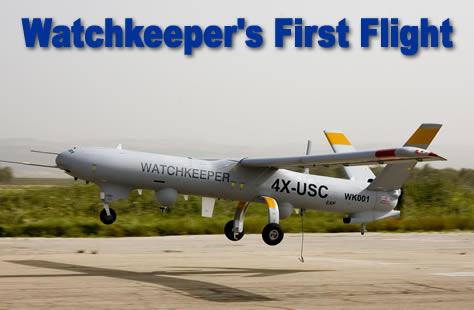 The Watchkeeper made its maiden flight on 16 April from Megiddo airfield in northern Israel. This unmanned aerial vehicle (UAV) is the first produced version of the Watchkeeper, based on the proven Elbit Systems’ Hermes 450 platform, to meet the specific requirements of the UK Ministry of Defence (MoD).

The visual differences between the baseline Hermes 450 platform and Hermes 450B which represents the Watchkeeper configuration are the landing gear, wing root assembly and engine air intake duct. The 450B uses a blended wing root while the Hermes 450 has a raised wing. Its air intake is curved, compared to the rectangular shape of the baseline version. The undercarriage uses beefed up landing gear to take the additional load. Hermes 450B is designed to fly with dual payload as a standard. (separate EO and SAR payloads in the fore and aft section.) The Hermes can fly with two payloads but usually operates with a single payload.

The Watchkeeper air vehicle is fully autonomous, including Automatic Take-Off and Landing (ATOL), and has a de-icing capability, to expand its ability to operate in all weather operational environment. The system is capable of rapid deployment and operations anywhere in the world. Watchkeeper will support the information requirements of the British Army, Air Force and Navy. Thales UK, as Prime Contractor for the Watchkeeper program, will deliver equipment, training and facilities, with the capability coming into service from 2010. Production of the Watchkeeper system will take place at U-TacS (UAV Tactical Systems Ltd), the Thales UK and Elbit Systems joint company, based in Leicester.

Commenting on this major program milestone, Richard Deakin, Managing Director of Thales’ aerospace business in the UK, says: “Thales UK’s Watchkeeper program is on track and has been steadily moving forward since June 2007 when the company unveiled its final configuration following a Critical Design Review undertaken by the MoD. We have made tremendous progress since the contract was signed in 2005 and all the customer-agreed program milestones have so far been met on or ahead of schedule.”

Looking forward to the plans for the rest of the year he adds: “2008 is an important year for the program as it will also see the testing and integration of the ATOL system, the I-Master radar and EO/IR/LTD payloads. The I-Master radar flight trials have been extremely encouraging. The SAR imagery seen in the initial trials is outstanding and testing the GMTI functionality has just commenced. The combination of these sensors operating in a networked manner will certainly provide a transformational step in ISTAR capability for the UK armed forces.”

Watchkeeper will provide the UK armed forces with an essential intelligence, surveillance, target acquisition and reconnaissance (ISTAR) capability, and will be a key component of the UK’s network enabled capability (NEC).