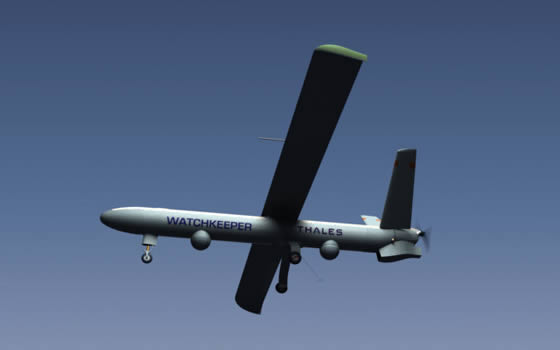 The WK450 Watchkeeper is a derivative of the Hermes 450, developed by Elbit System’s Silver Arrow subsidiary. Watchkeeper is expected to be operational in the British Army around 2010. Both systems are using the same configuration of a high wing and V for optimal aerodynamic and mission performance.

When deployed the Initial Operational Capability (IOC) Watchkeeper regiment will deploy 12 WK450 UAVs (regular regiment will have 16). The regiment will operate four batteries, each supporting a Brigade and two BattleGroup field headquarters. The regiment will also operate the launch sites, ground control and recovery teams while tactical command parties will dispatch to supported elements, they will be equipped to maintain different levels of control of the payload; all units will be able to receive raw images directly from the sensors. An entire system, ready for an initial 24 hours operation, will be deployable on a single C-130 aircraft.

The information collected on a mission is transmitted via line-of-sight datalink to the ground station for processing and interpretation by the ground element, and rapidly processed through existing intelligence and communications to the users. The aircraft was tested with an overwing satellite communication pod, which enables the aircraft to establish wideband datalink beyond-line-of-sight. Watchkeeper will support UK and coalition forces, including Special Forces, battlegroup command posts, attack helicopter formations, attack aircraft or battleships throughout the battlespace. The system is designed to be integrated with existing and future ISTAR capabilities, future command and effects systems over NATO common protocols. 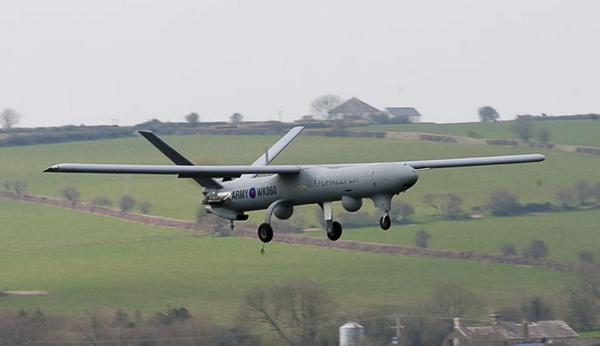 Under a £317 million order (over $500 million) awarded in October 2005 to the Leicester based UAv Tactical Systems Ltd. (U-Tacs) a joint venture formed by Thales UK and Elbit Systems up to 99 WK-450 UAVs will be produced over eight years. This order is part of the overall £700 UK MOD Wathkeeper program. WK450 follows the lines of Elbit’s Hermes 450, in service with the Israel Defense Forces (IDF) and the US Department of Homeland Security (DHS). WK450 is different from the Israeli version in its automatic landing capability, multiple payload configuration among other features. WK450 was designed for the “upper range” of tactical missions. Built of a spacious composite structure, it is optimized for long range, long endurance (+16 hours) multi-payload missions. Payloads include the Compass EO payload, comprised of four electro-optical systems (visual, Infra-Red (IR) laser rangefinder and designator), offering advanced scan modes and automatic target tracking, and the Thales I-Master Synthetic Aperture Radar (SAR)-Ground Moving Target Indicator (GMTI), radio relay, COMINT etc. When multiple payloads are carried, an EO/IR payload is mounted in the lower front section while SAR or other electronic sensors are mounted in the lower aft section. As WK450  is designed to support brigades and division levels, air vehicles are expected to operate at different altitudes – SAR missions are expected to be flown at maximum altitude (+16,000 feet) for optimal area coverage while EO/IR are expected to fly at around 10,000′ delivering optimal image quality.

Communications and electronic surveillance antennae are mounted on the wings and along the fuselage. Satellite communication support and external stores carrying capability, including extra fuel or weapons are inherent in the WK450 design and have been evaluated in the UK under the JUEP program. WK450 is designed for fully autonomous operation. It can be automatically deployed from short airstrips or catapult, and are retrieved back at the airstrip through automatic landing. 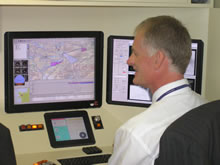 The Ground Control Station (GCS) is mounted on a standard 20 foot ISO container. The GCS facilitates workspace for up to four operators, including two image analysts and a communications specialist. GCS performs image processing, storage and intelligence dissemination, as well as ad-hoc mission planning. The GCS also handles interoperability and communications with all supported forces and other ISTAR assets. The GCS is equipped to control three UAVs. The IOC systems will use the C band datalinks already used in the Hermes, produced by Spectralink.

For the Full Operational Capability phase, Thales will use Qubic Common Data-Link (CDL) for the system, which are compatible datalinks used by US forces. Maximum operating range is limited by the line-of-sight datalink to 200 km. When satellite link is used, operational range can be extended. Current requirements do not provide for direct feed of image to helicopters, but such capability could evolve after the initial deployment and will be provided by adaptations to hardware used by its “clients”. The airborne segment of the datalink has built-in relay capability to enable all airborne UAVs to support each other to overcome topographical limitations. This feature is also supported by the mission planning system providing significant advantage over current systems.

The majority of the system will be produced in the UK. Airframes will be produced at Leicester (airframes), the ground segment relies entirely on British technology. Hardware will be produced in Cambridge (shelters). other companies involved include Vega, Praxis and Cobham. Flight testing will be performed at Cardigan Bay. LogicaCMG will be providing the digital battlespace integration and QinetiQ will contribute its image processing capability. Boeing is also involved, to ensure integration with US systems. Thales’ has also established a system integration site at its Crawley site, where a synthetic Watchkeeper environment will support the modeling and integration of the system’s elements, to reduce development risks and complete the program within the ambitious schedule set by the MOD.