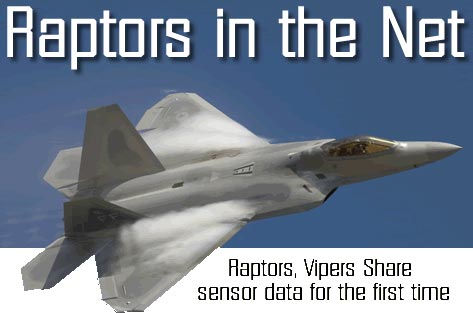 Due to security considerations, the access to information provided by some of the most advanced sensors currently available in theater is highly restricted. For example, intelligence and situational picture generated by F-22 Raptors cannot be transferred to F-15s, F-16 or AWACS even if both units are participating in the same operation. As stealth aircraft, F-22s are not equipped with conventional datalinks such as Link-16 which can be easily spotted by enemy SIGINT. Instead, they use a unique stealth-qualified, narrow-beam Intra-Flight Data-Link (IFDL) designed to relay data and synchronize a situational picture only among the Raptors. As this stealth datalink is incompatible with all other communications devices, Raptors cannot communicate with any friendly aircraft.

The experimental Battlefield Airborne Communications Node (BACN) developed by Northrop Grumman will partly solve this issue. An early version of this airborne relay currently employed on a NASA WB-57 in Afghanistan utilized a range of radio datalinks to bridge between different networks. A more advanced version integrated in a Gulfstream business jet is being tested. When completed, Northrop Grumman proposes to deploy BCAN on the Global hawk UAV.

During the exercise, two Lockheed Martin F-22 Raptors tested a new method for universal F-22 connectivity with an experimental version of the Rockwell Collins’ Tactical Targeting Network Technology (TTNT). For the first time F-22 sensor data was down-linked to the Combined Air Operations Center (CAOC) using a tactical network. In a previous test performed as part of JFEX08-2 earlier this year, images were transmitted from an F-22 to an F-16 via a ground based gateway. Through this experiment, the new radio successfully sent classified sensor data to ground stations at Nellis and Langley Air Force Bases, which then relayed the data to airborne F-16s. According to Col. Moulton, the test provided essential support for further development of future. Battlefield Airborne Communications Node ( BACN) assets and a future ground mobile gateway are designed to support joint air and ground operations.

Other topics covered in this series: