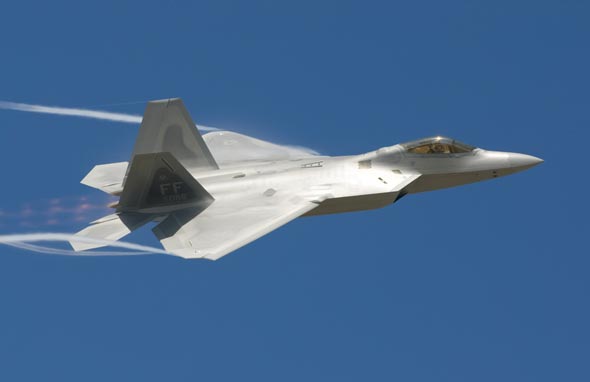 The F-22 dominates any adversary through unmatched performance: stealth, supercruise speed, agility, precision and a complete view of the battlespace achieved with the advanced sensor suite embedded in the aircraft. Operational Raptors are assigned to the 1st Fighter Wing at Langley AFB, Va. (27th and 94th Fighter Squadrons) first aircraft are scheduled for delivery to the 3rd Wing at Elmendorf AFB, Alaska (90th Fighter Squadron) later in the summer of 2007. Future Raptor bases include Holloman AFB, N.M., and Hickam AFB, Hawaii.

The US Air Force goal is to fly 381 aircraft, but the current program, reflected by the Quadrennial Defense Review includes only 183 on contract. 105 Raptors have completed final assembly at the Lockheed Martin facility in Marietta, Ga. Deliveries to the Air Force total 99 F-22s so far. Raptors are delivered at a rate of approximately one every six weeks. On November 12, 2009 the Pentagon approved $40 funding for four additional aircraft, under a $140 million budget approved by the US Congress to fund long-lead material for 20 additional aircraft. Decision whether to release the remaining budget is expected after the new administration is established, in January or February 2009. According to Aviation Week, initial indications from the new administrations hint on continued support for the Raptor program. Anticipating a potential cut in the near term, the USAF could negotiate reducing the total procurement to 250-275 Raptors. The Air force considers offsetting the decrease in numers by reducing aircraft deployed with each squadron from 24 to 18, allowing the Air Force to sustain seven fighter squadrons.

To differentiate its latest production aircraft, Lockheed Martin is branding its latest designs, F-22 and F-35s as “5th Generation Fighters”, highlighting their superiority as fighters and force multipliers in modern air warfare. Therefore, the F-22A Raptor is referred to as “5th generation air dominance fighter”. To justify this ambitious title, Lockheed Martin and the US Air Force are highlighting the excellent performance and user satisfaction, reflected in the recent exercises (the Raptor has yet to justify these expectations in combat.

The F-22 Raptor is built by Lockheed Martin in partnership with Boeing and Pratt & Whitney. Parts and subsystems are provided by approximately 1,000 suppliers in 42 states. F-22 production takes place at Lockheed Martin Aeronautics facilities in Palmdale, Calif.; Meridian, Miss.; Marietta, Ga.; and Fort Worth, Texas, as well as at Boeing’s plant in Seattle, Wash. Final assembly and initial flight testing of the Raptor occurs at the Marietta plant facilities. The US Air Force operates a training squadron at Tyndall AFB, Florida for the training of pilot and ground crews, while flight testing continues at Edwards AFB, California and tactics development are ongoing at Nellis AFB, Nevada.

The US Air Force evaluated plans to expand the aircraft missions, with possible fielding of a modified and enhanced F-22ER version but at present, its top priority is to get as many ‘A’ Raptors it can, seeking to get as close as possible to its 381 aircraft goal. Therefore, the current Raptor fleet is expected to go through incremental upgrades rather than a model change, such upgrades will include the integration of a new communications (datalink) enabling greater information sharing between F-22s and other aircraft and combatant commanders (currently, Raptors can share information only among themselves). These datalinks could be based on future enhancements of the AESA radar, which are expected to include datalink waveforms. Other options include the integration of Link 16 (which was removed from the original suite few years ago) or installation of TTNT.

A high priority is the introduction of AIM-9X short range heat-seeking air-to-air missiles. Although the Raptor has provisions for two AIM-9X missiles carried in the side weapons bay, they were not integrated yet into the system, as the Raptor relies on six AMRAAM missiles used primarily for BVR kills. When the Sidewinders will be included, pilots may reconsider the use of helmet mounted cueing system (JHMCS) which hasn’t been included in the current avionics suite.

Expanding the aircraft ground support role, future upgrades are planned for the AN/APG-77 AESA radar, including the addition of synthetic aperture radar (SAR) mode, introduction of electronic attack and geolocation improvements to support Global Positioning System (GPS) guided weapon retargeting. Among the new weapons to be introduced is the GBU-39/40 Small Diameter Bomb. Currently, the aircraft carries ordnance only inside the weapon’s bay to preserve its stealth characteristics. However, the Raptor has hardpoints (two per wing) which are currently cleared only for external fuel tanks. These could be used for external weapons carriage. Operational testing of these upgrades is scheduled to start in 2009 with fielding beginning in 2010.

The Raptor was cited for its overwhelming performance in the demanding Northern Edge joint military exercise. 12 Raptors were deployed to Alaska to take part in this large-scale, force-on-force exercise. During the exercise they achieved a fascinating 80-to-1 kill ratio against their Red Air opponents. Raptors flew eight sorties per day meeting 97 percent of their scheduled missions. (Similar kill ratio was achieved by the Israel Air Force in combat against the Syrian Air Force, during the battle over the Beka’a valley in Lebanon, 1982.) In addition to air-to-air missions, Raptors also demonstrated ground attack capability dropping 1,000-pound, GBU-32 Joint Direct Attack Munition (JDAM) weapons. Apart from their overwhelming success against aggressors, Raptor pilots contributed to the overall situational awareness for the entire Blue Force team exploiting the F-22’s integrated avionics package. According to the commander of the F-22 squadron, the most impressive outcome of the exercise was the realization by all players of just how much of the battlespace information or situational awareness F-22s saw and could share with other forces. This increased the effectiveness and survivability of all flying with the Raptor. For their impressive operations in Northern Edge, the Raptor team was awarded the national Aeronautic Association’s Collier Trophy.

“The Raptor’s performance in Northern Edge confirmed that it is the most lethal, reliable, survivable and revolutionary fighter the world has ever seen. Joint and allied force commanders talk about the commanding presence of the F-22 and how the Raptor makes everyone in the battlespace better,” Lockheed Martin Aeronautics Executive Vice President and F-22 Program General Manager Larry Lawson, told Defense Update. “Pilots will tell you about the quantum leap in situational awareness the Raptor provides, and maintainers are amazed at how much easier it is to keep the F-22 in the air, day-in and day-out in any environment. That is the level of performance and reliability the F-22 is delivering today.” Lawson said the F-22 has recorded several major milestones over the past year including its first overseas deployment and the first participation by a Raptor unit at Red Flag, the Air Force’s highly realistic combat training exercise.

More recent missions included a 90 day deployment of 12 aircraft from the 27th Tactical Fighter Squadron, (1st TFW Langley) from Langley VA to Kadena Air Base, Japan during the spring of 2007, where Raptors flew more than 653 sorties (854 flight hours) with both U.S. and allied forces demonstrating 99% availability. The 1st Fighter Wing’s 94th Fighter Squadron participated in the Raptor’s first trip to Red Flag earlier in 2007. The Raptors flew 168 sorties, demonstrating 100 percent sortie generation rate for the 94th Fighter Squadron pilots. “This Red Flag exercise was the first exposure to the Raptor’s capabilities for many of the participants,” noted Lawson. “The Aggressor pilots quickly became very frustrated because the Raptor’s stealth, speed, agility and 360 degree situational awareness ensured an overwhelming advantage.”

An F-22 Raptor crashed on March 25, 2009 near Edwards Air Force Base, in the high desert of Southern California. The jet, assigned to the 411th Flight Test Squadron of Edwards’ 412th Test Wing, was on a test mission. F-22s were grounded for two weeks after one crashed at Nellis Air Force Base in Nevada in December 2004. Today’s crash is the first such accident since the Raptor became fully operational in 2007.