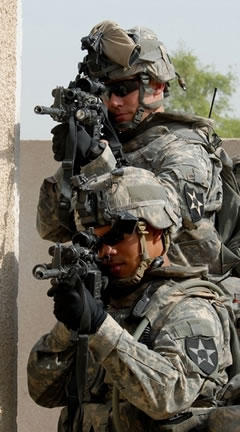 Land Warrior systems developed by General Dynamics Command & Control systems were fielded in 2007 in Iraq, with the deployment of the 4th Battalion, 9th Infantry Regiment. Facing the challenges of asymmetric warfare in theater, Land Warrior contributed to the battalion’s success and prompted other units to ask for these capabilities. The system provided enhanced unit’s capabilities to fight and sustain asymmetric warfare operations, as well as improved security and effectiveness of security and stability operations. Key attributes for the system’s success were improved situational awareness, and the ability to command and control small combat elements, providing more economical and effective use of limited forces.

Land Warrior is a modular fighting system that uses state-of-the-art computer, communications, and global positioning technologies to digitally link Soldiers on the battlefield. The system is integrated with the Soldier’s body armor and has a helmet-mounted display.

Soldiers wearing the Land Warrior system are provided with an updated situational awareness picture while dismounted from their vehicles – a common feature in computer wargames but sofar unavailable to the infantry leader. It allows them to see all friendly forces that are in their area of operations. They can tap into detailed maps, execution checklists, and other mission-essential information stored by the system. The system can store more than 600 images including photographs of targets and locations. In addition the system supports voice and text messaging. The Soldier views the maps and imagery through the helmet-mounted display, which is pulled down over one eye when needed. Each Soldier wearing the system is represented by an icon on the map. Using drop-down menus, team leaders and commanders can place virtual icons, or virtual “chem lights” onto a map identifying known enemy locations or other essential information. The system allows leaders to quickly relay information in the middle of a mission.