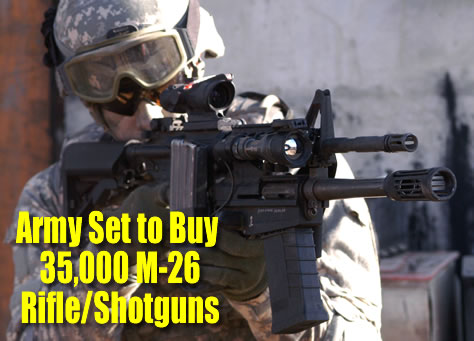 The U.S. Army plans to acquire 35,000 M-26 Modular Accessory Shotgun System (MASS) – a combined Rifle/Shotgun weapon to be deployed in the next fiscal year (FY09). M-26 MASS will improve operational capabilities and reduce the combat load of infantry, special operations and military police units. M-26 is a 12 gauge MASS, attached to the standard M-4 or M-16 just as the M-203 rifle grenade does. The weapon is expected to reduce the number of weapons an infantry unit or a special forces team has to carry. The new combination rifle/shotgun has a collapsible butt stock for use as a stand-alone weapon.

“Right now if a Soldier wants to use a shotgun, he uses a shotgun and slings his rifle and when he uses his rifle he has to sling the shotgun and then get out the rifle,” said Maj. Lawrence Dring, assistant program manager for individual weapons at Picatinny Arsenal, N.J. “With the M-26, it’s an all-in-one piece. It has a door-breaching attachment which goes flush against a door lock and allows the 12-guage shell to blow the lock off a door and the Soldier to room clear without changing weapons.” To further assist breeching capabilities, the Army is fielding the specialized GREM rifle grenade, designed to knock down doors from a safe distance.

The M-26 can also be used in non-lethal operations by using rubber buckshot or slugs in the shotgun while the rifle or carbine carries live rounds. This way if the situation changes and becomes deadly for Soldiers, they can place their primary weapon on “fire” mode.

Another weapon currently under development is XM-25 Individual Airburst Weapon System (IAWS). The futuristic-looking weapon will employ several types of ammunitions, including an airburst round, capable of defeating targets under cover (defilade targets – those targets protected by obstacles such as walls, hills or ridges). The lightweight weapon weighs only 2.5 pound, as it is constructed of composite materials. The weapon will include an integrated target acquisition/fire control system integrating a thermal sight, direct-view optics, laser rangefinder, compass, fuze setter, ballistic computer and an internal display.

The weapon will fire a range of 25mm munitions that include high-explosive airburst, armor-piercing, anti-personnel, non-lethal, training and breaching rounds, a soldier will use the weapon by simply placing the aim point on the target and activate the laser rangefinder. The fire control system will then provide an adjusted aim point that the soldier adjusts for distance. The range data is communicated to the round which when fired will explode over the target at a precise programmed distance. The Army expects the XM-25 to be fielded by 2013.

The two weapons were displayed by the Army on Capitol Hill in May 2008, demonstrating to lawmakers what the Army plans to field next year.