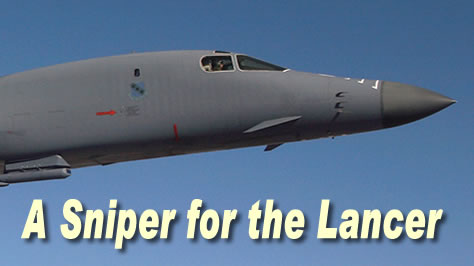 Testing of the Lockheed Martin Sniper Targeting Pod on board the B-1B Lancer bomber has been accelerated in recent and is nearly completed, leading to the Air Force’s Air Combat Command plans to approve sending pod-equipped bombers on operational missions by mid-summer.

Because the sniper pod is a desperately needed capability in theater, Edwards Global Power Bomber Combined Test Force and the 337th Test and Evaluation Squadron from Dyess Air Force Base, Texas, combined the operational and developmental testing of a B-1B Lancer to accelerate the integration of the sniper targeting pod with the B-1B bomber. “Everyone at the here has been incredibly focused on getting this done,” said Lt. Col. Troy Asher, Global Power Bomber Combined Test Force director and 419th Flight Test Squadron commander. “In the span of about two weeks, [we have accomplished what] was originally planned for two months.” said Col. Asher.

For more than four years, the B-1 has been the workhorse of the weapons delivery both in Iraq and in Afghanistan, Colonel Asher said. “A lot of times, we are not allowed to drop on targets because we are not exactly sure we wouldn’t hit friendlies, or we might hit something we are not supposed to hit,” he said. “The targeting pod is probably one of the most significant upgrades to the B-1,” said Capt. Brandon Miller, B-1 flight commander and 419th Flight Test Squadron targeting pod project pilot. “This is significantly going to decrease the time from a request for a bomb on a target, to actually dropping a weapon, creating the desired lethal effects and then being able to assess and re-attack if necessary.”

“With the pod, we can cross check coordinates and visually determine and correlate the target we want to strike,” said Maj. Joshua Lane, 419th FLTS flight test weapons systems officer and assistant director of operations. “The rules of engagement and the instructions in theater are very robust to prevent an aircrew from bombing the wrong target. There’s a very deliberate chain that has to be followed. Adding the target identification capability to the chain gives us the level of security we need to accurately strike targets.” Moreover, through the video downlink on the pod, the new system can provide instantaneous feedback to the joint terminal attack controller.