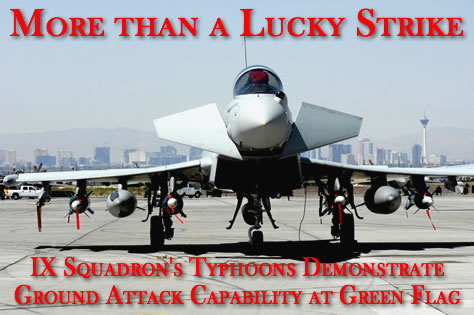 Folowing a successful test program seven Typhoons from RAF XI Squadron, based at RAF Coningsby, Lincolnshire participated demonstrated their operational capabilitiesthe at the Green Flag exercise at Nellis AFB in the USA. XI squadron’s Typhoons are expected to be declared ‘combat ready’ by the target date of 1 July 2008.

Over the two-week period the Typhoons dropped a total of 67 munitions, comprising 43 Paveway II bombs, eight enhanced Paveway IIIs and 16 1,000 lb (454kg) free fall weapons. Exercise Green Flag West is a joint USAF and Army exercise in which close air support for ground forces is a crucial element aimed at preparing air and ground forces for deployment to overseas operational areas. It is played out in scenarios which simulate the sort of asymmetric combat experienced in conflicts such as those in Iraq and Afghanistan.