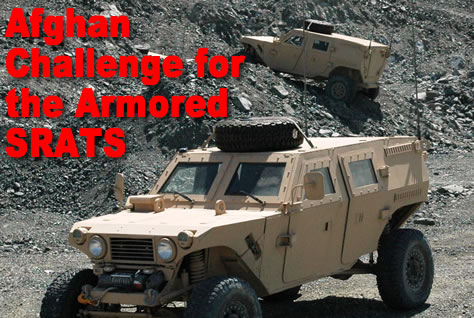 The U.S. Army is testing a new all-terrain vehicle based on the SRATS platform, built by STRATS, in cooperation with BAE Systems. According to a recent Army release, soldiers from Combined Task Force Currahee recently test-drove three such vehicles that could help alleviate some of the problems they have maneuvering through Afghanistan’s mountains and valleys. The armored version of the SRATS is designated Enhanced Logistic Off-Road Vehicle (ELSORV) utilizes a platform designed by the Utah based company to perform rock climbing.

Three prototypes are being tested. Afghanistan’s rocky terrain makes the going slow and difficult for supply convoys, evacuation and basic ground transportation. The construction of the three prototypes was funded by the Army’s Rapid Equipment Force. Over the past year, the ELSORVs went through operational assessments in the United States, and now they are here for a real-world assessment by the soldiers who could end up using the vehicles.

“The ELSORV is unlike any other military vehicle I’ve driven,” said Army Sgt. Lance Davis, one of the test drivers. “It goes wherever you want it to go.”

said Charlie Copsey, one of the engineers that built the vehicle. ELSORVs can carry 2,700 pounds, and they have modified Humvee engines that can conquer approach angles of 90 degrees and climb slopes at 80 degrees. “As long as they have power going to one of the wheels, they’re going to stay mobile,” Copsey said. The ELSORVs allow soldiers to go over obstacles without getting hung up on the undercarriage. The vehicle can go 90 mph safely on a hard surface.