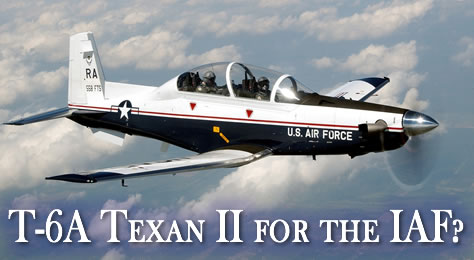 Israel submitted formal request to procure 25 T-6A Texan II trainer aircraft to replace its current fleet of Zukit trainers. Zukit, a locally assembled version of the French designed Potez CM 170 Magister, entered service with the Israel Air Force in the mid 1960s. The IAF is seeking replacement for these trainers for many years, but so far failed to promote this program, which competed for scarcely available resources. According to IAF plans, training activities will be shifted to privately financed (PFI), where contractors will be paid for flight hours, and bear all fleet maintenance and logistics costs. Weather the current request is part of such PFI is not clear yet. The total value of this program, if all options are exercised, could be as high as $190 million.

According to the Defense Security Cooperation Agency (DSCA), which released this potential foreign military sale (FMS) request, the aircraft will be fitted with basic avionics including embedded Inertial Navigation System/Global Positioning System (INS/GPS) system based on CMC’s CMA-4124 GNSSA. The aircraft is fully aerobatic and features a pressurized cockpit with an anti-G system, ejection seat and an advanced avionics package with sunlight-readable liquid crystal displays. The T-6A is powered by a Pratt & Whitney Canada PT6A-68 turbo-prop engine that delivers 1,100 horsepower. Because of its excellent thrust-to-weight ratio, the aircraft can perform an initial climb of 3,100 feet (944.8 meters) per minute and can reach 18,000 feet (5,486.4 meters) in less than six minutes.

The Israeli Air Force’s (IAF) fleet of Zukit aircraft was produced in the early 1960s. The Zukit’s high fuel and maintenance costs, and low mission capable rates led to the IAF’s decision to procure new trainer aircraft. The T-6A aircraft will reduce training fuel requirements by 66%. A major improvement is the integration of two Martin Baker ejection seats, which have the capability for zero-zero ejection. The Hawker/Beechcraft (Formerly Raytheon) T-6A Texan II Joint Primary Aircraft Training System (JPATS) is actually a modified version of the Swiss Pilatus PC-9 MkII trainer. It entered service with the US Air Force in the year 2001 and with the US Navy In 2005, and is used since for primary pilot training of both services. To date, over 435 T-6A aircraft have been delivered and the fleet has accumulated over 625,000 hours training pilots. Overall, the JPATS program calls for nearly 800 deliveries through the year 2017. International operators of the aircraft include the Hellenic Air Force, and the NATO training detachment in Canada. Morocco has also selected the Texan II to replace aging T-37s, as part of its current procurement of F-16 fighters.