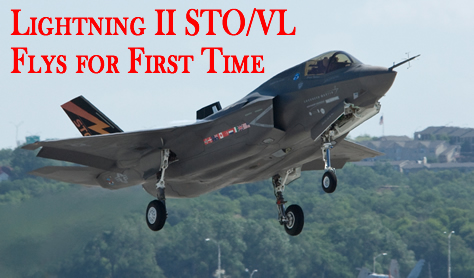 The Short Take Off / Vertical Landing variant of the Lightning Ii Joint Strike Fighter (F-35B) made its first flight today (June 11, 2008) at Fort Worth, Texas with Lockheed Martin test pilot Graham Tomlinson at the controls. Tomlinson, a former Royal Air Force Harrier pilot now employed by BAE Systems, performed a conventional takeoff at 10:17 a.m. CDT from Lockheed Martin’s Fort Worth facility. As planned, all initial F-35B flights will be made using conventional takeoffs and landings, with transitions to short takeoffs, hovers and vertical landings beginning early next year. Tomlinson guided the jet to 15,000 feet and performed a series of handling tests, engine-power variations and subsystems checks before landing at 11:01 a.m. CDT.

The F-35B, known as BF-1, becomes the second Lightning II to enter flight test, preceded by the conventional takeoff and landing (CTOL) F-35A, which first flew in December 2006 and has completed 43 flights. The F-35B that flew today is the second of 19 System Development and Demonstration aircraft and the first to incorporate new weight-saving design features that will apply to all future F-35 aircraft.

Though nearly identical in appearance to the F-35A, the F-35B incorporates a counter-rotating shaft-driven lift fan positioned directly behind the cockpit. The lift fan, produced by Rolls-Royce, is turned by a drive shaft from the F-35’s massively powerful single engine, which features a swiveling rear exhaust nozzle that vectors thrust downward during vertical flight. The lift fan, engine and stabilizing roll ducts beneath the F-35B’s wings combine to produce 40,000 pounds of lifting force.

Converting the F-35B from STOVL to conventional flight and vice-versa requires only the push of a button by the pilot. The system otherwise operates automatically.
The F-35B will be the first of the three Lightning II variants to achieve Initial Operational Capability, beginning with the Marines in 2012. The STOVL variant also will be used by the United Kingdom’s Royal Air Force and Royal Navy, and Italy’s Air Force and Navy. Israel is also considering splitting its F-35 buy between conventional F-35As and the STOVL B models. With the capability to operate from a variety of ships or austere runways, the F-35B can deploy closer to shore or near front lines, shrinking distance and time to the target, increasing sortie rates and greatly reducing the need for support assets.