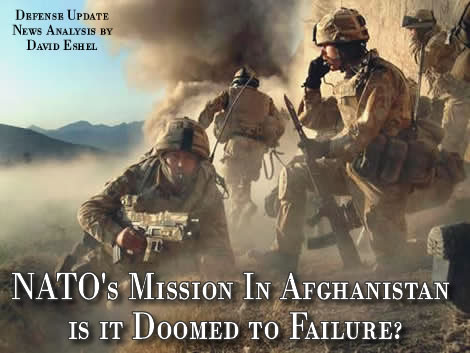 When NATO assumed command and control of the International Security Assistance Force (ISAF) mission on 11 August 2003, the ISAF Headquarters structure was built around the NATO Allied Rapid Reaction Corps headquarters model. Since then, it has evolved to a composite headquarters formed with staff drawn from NATO Standing HQs and individuals provided by both NATO nations and other nations contributing to the mission. Rather than large groups moving when commanders change, as was the case before, individuals are now rotating on a regular basis. This has greatly contributed to enhanced continuity. But there are other problems.

The specific operation in Afghanistan results from the differing strategic priorities of the nations participating in ISAF. Whereas NATO members such as the United States and Britain have understood the operation in Afghanistan as an anti-terror operation from the very outset, others such as Germany and Italy emphasized their role in stabilizing and rebuilding the country. Moreover, various national priorities have been the cause that NATO countries have scaled back their commitments and in some cases placed crippling restrictions on the deployment of their troops, especially when sending these into high-risk combat environment. Many NATO countries, such as Germany, France, and Italy, put caveats on the use of their forces in Afghanistan – restricting their movements and levels of engagement with enemy forces.

While the U.S. brings a compatible, well-equipped and ultra-professional army to the table, other nations are not so fortunate. Many European armies are traditionally lacking basic equipment; much of it is obsolete and incompatible with modern systems. Multi-national training, especially in net centric situation awareness procedures in combat, is insufficient and prone to demoralizing fratricide incidents. This becomes especially risky in air-ground support missions – where communication procedures are not adequately comprehended, often due to language problems. The 2006 awarded $7.8 million multinational, global positioning satellite-based, friendly force tracking system, could perhaps solve much of this acute problem.

But the U.S. and its allies are divided over the basic mission in Afghanistan. An Atlantic Council report found that the joint US-ISAF mission is “disorganized, uncoordinated and at present insufficient. In fact, NATO troop commitments to Afghanistan have fallen well short of needs. At the 2008 NATO summit in Bucharest “A dozen NATO countries have pledged only on a total of about 2,000 troops, while senior alliance commanders in Afghanistan have urged the need for about 10,000 more troops to meet minimum operational demands. Running a multinational operation, however, requires a fundamental willingness to share burdens and risks on all parts.

Canada, which has 2,500 troops operating in Kandahar province in the south, had already warned that it would pull out next year unless another NATO country offered to send at least 1,000 soldiers to back them up. But even if countries like France are willing to do so, you can’t suddenly move those brigades to Afghanistan. They require retraining. They will have to be re-equipped and restructured to fight a different kind of war on different terrain, dealing with a different culture with different values and this takes time.

The United States has about 33,000 U.S. troops deployed in Afghanistan, while about 40 other countries have contributed a total of 29,150. France is sending an additional 700 troops this summer, and Germany has said it may send another 1,000 troops in the fall; meanwhile it has deployed its quick reaction force (QRF) in Mazar-i-Sharif in Afghanistan’s northern Balkh province. This may be encouraging, but not sufficient, as long as the present deployment limits persist.

Despite that billions have been spent and more than 500 U.S. soldiers have died in Afghanistan in the hunt for Al Qaeda and Taliban, there’s increasing evidence that the terror groups are making constant progress in their efforts, operating just across the border in Pakistan – in the lawless tribal territories, where the Pakistani government has virtually lost control.

With the war against terror now in its seventh year, U.S. officials acknowledge there is no real strategy for digging Al Qaeda and the Taliban out of their safe havens. In fact, military experts believe, that the limited cross-border ops, from Afghanistan or predator strikes will ever accomplish what is needed in the clearing of this dangerous territory, not to mention, actually holding it, against insurgents’ efforts in retaking it. NATO’s latest offensive focused on the area of the Khyber Pass, the strategic area, from where the Taliban mount their cross-border raids into Afghanistan- but once left the Taliban returned and continue to use tribal areas in Pakistan’s North West Frontier Province as a staging post. Taliban command and control structures were able to relocate to Quetta, and parts of Waziristan, which are now virtually under the complete control of Taliban elements.

Defense Secretary Robert Gates warned that he had “real concern” about rising violence in eastern Afghanistan and said Pakistan was contributing to Afghanistan’s instability by failing to prevent militants from crossing over the border, to carry out attacks against NATO forces. Unfortunately, this problem is in part self-created. The U.S. Government policy does not allow cross-border operations from Afghanistan onto Pakistan territory. What this means, in clear language, is that troops are forced to stay on the Afghan side of the border and watch militants come across, to shoot at them, kill them, bomb them and then escape to safety, while the GIs watch frustrated and absorb the casualties.

What has received too little media attention sofar, was Pakistan’s “social environment” which is indeed overwhelmingly supportive of the guerrilla movement to expel NATO troops from Afghanistan.

The fact is that Taliban are made up mostly of Pashtun, who also make up 42 percent of Afghanistan’s and nearly 20 percent of Pakistan’s population. Many of the Pashtun in both Pakistan and Afghanistan actually resent the boundary, drawn by the British colonials, dividing them between the two countries. Throughout history the Pashtun are proud to have demonstrated indomitable valor in beating back the various invaders, such as the Alexander’s Greeks, the British and Soviets, all of which received “bloody noses from their costly venture. Now, seeking a similar aim, the Taliban are attacking NATO troops in Afghanistan from bases in Pakistan and in some cases, elements of the Pakistani army are even supporting these efforts.

None of this will come as a surprise to anyone tracking the situation in northwestern Pakistan. Since the signing of the Waziristan Accord on September 5, 2006, essentially ceding North Waziristan to the Taliban and al Qaeda, attacks in both Pakistan and Afghanistan have skyrocketed. Afghanistan has seen an increase in attacks of more than 300 percent, and battalion-sized groups of Taliban fighters have been hit while crossing the border from Pakistan.

Is NATO actually winning or losing the war in Afghanistan?

In a remarkable shift, Afghanistan, where U.S. officials were once confident of victory, is now rivaling Iraq as the biggest cause of concern for American policymakers. According to a new Pentagon report, Taliban militants have regrouped after their initial fall from power and “coalesced into a resilient insurgency. The report paints a grim picture of the conflict, concluding that Afghanistan’s security conditions have deteriorated sharply while the fledgling national government in Kabul remains incapable of extending its reach throughout the country or taking effective counter-narcotics measures.

The turnaround in Washington’s strategic assessment over Afghanistan poses a dilemma for the Bush administration, which had counted Afghanistan as the pinnacle of its success in the war on terror. U.S. commanders say they need more forces, but they can only be provided through withdrawing troops from Iraq. As a result, the administration may have to choose between accepting a smaller U.S. presence in Iraq or facing the prospect of turmoil in Afghanistan. Senior Pentagon officials and US military commanders have ordered a top-to-bottom review of U.S. strategy in Afghanistan. The review was prompted by high-level concern that the U.S. “was losing ground and slipping backwards,” said a senior military official familiar with the review. One matter is crystal clear: As long as the Taliban sanctuary bases in Pakistan are not eliminated, the United States and its NATO allies will face crippling long-term consequences in their effort to stabilize and rebuild Afghanistan.

But solving this problem will require a difficult diplomatic feat through determined convincing Pakistan’s government to undermine the Taliban sanctuary on its soil. Whether the new US administration, coming into office next year will be up to this task remains highly questionable.

As the situation stands in summer 2008, no less than forty nations are embroiled in a seemingly unwinnable warfighting situation in Afghanistan. The country is in the grip of global interest-driven politics. It is, as so often in its history, a mere pawn on a shrewd political chessboard surrounded by many more than two players. While NATO tries desperately to disarm the local insurgents, the incessant flow of guns and explosives smuggled into the country from Pakistan continues unabated.

And there are regional interests at stake as well. The Iranian government is accused of promoting Afghan opium and heroin trade, to inflict harm on their Western “Satans”. Russia is using its former Soviet-era influence to weaken NATO, its old rival, on Afghan soil. Moscow still deplores Afghanistan as its painful experience, three decades ago, when it fought it’s own losing campaign there. There is certainly China, Afghanistan’s easternmost neighbor, who hopes to exploit untapped mineral sources in the nearby mountains, to mention but a few contenders in the Afghan tragedy.

A dramatic chapter in world history is being written in the process, in this country dominated by the Hindu Kush Mountains and the formidable Sefid Kuh range, and the endless deserts of Kandahar and Helmand. The United States and Europe have stumbled their way into a new type of international war, one in which all of todays global and regional powers are involved. What will happen to NATO if it fails in the first out-of-area mission in its history? And where will the UN be if this ambitious nation-building project is ultimately a disappointment? These are questions, which will lie at the doorstep of America’s newly elected president and commander in chief.

To even attempt a military occupation of the entire country would require a minimum of 200,000 troops- even with this kind of force, the effort could well backfire. In fact, as usual, it is already much too late for such action. A total of 8000 US troops were dispatched to seal the victory of Operation Enduring Freedom. The 4000 “peacekeepers” sent by other countries never left Kabul. As it seems, NATO and the US failed in Afghanistan, just as the Bush administration bungled Operation Iraqi Freedom.

But not all is bleak in the Afghan war. US troops and its allies are winning virtually every tactical clash in both against Taliban and Al Qaeda. NATO and international troops could still win tactically, but strategically, the Taliban is sharply expanding its support areas as well as its political and economic influence and control in Afghanistan. Without an all-out effort by a comprehensively led force, with NATO nations fully committing their troops to combat- the Afghan campaign cannot hope to be won. Indispensable to any success to defeat Taliban and Al Qaeda would also require a policy shift in Pakistan, including a consistent effort by the Pakistani army, in both the federally administered tribal areas in western Pakistan and the Baluchi area in the south.

Finally, Washington has pumped-in more than US$10-billion in aid since 2001 to Pakistan and wants more done to stop it’s based Islamists from fighting in Afghanistan. It is high time that this huge investment should pay off.