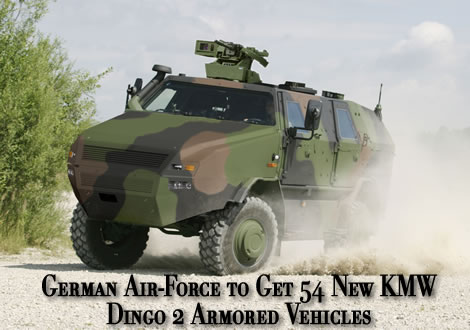 Krauss-Maffei Wegmann (KMW) will produce 50 new Dingo 2 all-protected vehicles and remote controlled weapon stations, under contract awarded by the German Federal Office of Defence Technology and Procurement (BWB). The contract includes the manufacture and delivery of a total of 50 DINGO 2 patrol and backup vehicles, four DINGO 2 GSI (battle damage repair) vehicles, to be delivered to the German Air Force by the end of 2008. The contract includes options for 44 optional DINGO 2 GSIs. The contract also covers 230 light and 190 heavy remotely operated weapons stations (FLW).

Dingo 2, is a 12 ton, four-wheel drive, all-round protected vehicle. It has been used for several years by the armed forces of Germany, Belgium, Austria and the the Czech Republic. Luxembourg has recently placed an order for 48 DINGO 2. The vehicle is used in deployments worldwide, including in Afghanistan, Kosovo and Lebanon.

Like all other new Armored Command and Control Vehicles (German: Geschützte Führungs- und Funktionsfahrzeuge =GFF) of the German Armed Forces under the GFF procurement program for self protection, the DINGO 2 is equipped with light and heavy weapon stations. The armored transport vehicle BOXER is also equipped with similar weapon stations for self-defense. The FLW systems can be remotely controlled and operated by the crew from inside the vehicle, under armor protection. The weapon stations carry optronic systems providing the operators with visibility and aiming by means of video monitoring, under daylight and night time conditions. The weapon mount is gyro-stabilized, improving aiming and firing stability while on the move. The ballistic computer is automatically set to identify and function with the type of weapon mounted – machine gun or automatic grenade launcher.

In 2007 the German Army evaluated several types of weapon stations and favored the two modular weapons stations from KMW – FLW 100 and FLW 200. According to the manufacturer, both systems offer low weight (100 and 200 kg respectively).