AAI and QinetiQ North America’s Technology solutions Group are cooperating in an effort to integrate the control of unmanned aerial and ground systems (UAS/UGV) in a single ground control station (GCS), based on AAI’s One System, which is already used by the US Army and Marine Corps for the control of a number of UAS.

This effort is part of an AAI strategy to bring the One System to fully support NATO standardization agreement (STANAG) 4586, translating information from unmanned vehicles into standardized message formats that can be shared with other systems. Likewise, information can be transferred back into vehicle-specific messaging formats for seamless interoperability. “As a whole, the technologies AAI recently demonstrated represent a comprehensive, STANAG 4586-compliant solution,” says AAI’s Vice President of Unmanned Aircraft Systems Steven Reid “Our GCS architecture provides command-and-control capability for all compliant UAS, and now for UGV and USV systems too.”

The companies presented the potential benefits of such integration in a recent demonstration, where imagery collected by a Shadow 200 flying overhead was displayed to the TALON’s controller, offering greater situational awareness from data provided by the UAS overhead.

The STANAG 4586 compliant One System’s architecture provides a common user interface that can dynamically configure to the type of unmanned system being controlled. The system uses vehicle-specific modules (VSM) to match each specific system being controlled. In the Talon’s case, the system demonstrated a STANAG 4586-to-JAUS translation to support the TALON’s Joint Architecture for Unmanned Systems (JAUS). This also allows video to be transmitted from Talon to AAI’s One System Remote Video Terminal (OSRVT).

The systems AAI demonstrated to support this mission also included VSMs for its Shadow 200 and Aerosonde unmanned aircraft, as well as software which successfully allows the GCS to interface with the Navy’s unmanned vehicle management system (UVMS). The UVMS provides a task-driven interface that is expected to be used on the Navy’s Littoral Combat Ship to coordinate all unmanned vehicle activity. AAI has also demonstrated the control of an unmanned surface vessel (USV), using the same GCS architecture in a man-portable configuration called an Expeditionary GCS. These technologies were designed and developed in conjunction with the U.S. Navy Naval Surface Warfare Center Panama City and the U.S. Army’s unmanned aircraft systems (UAS) Program Office to support NATO interoperability standards. 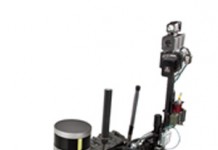