The first Saab Erieye 2000 AEW aircraft is currently undergoing flight testing in Grenada, Spain and expected to continue throughout the fall of this year. This is the lead of five aircraft ordered by Pakistan. Two similar aircraft have also been offered to Thailand, the first has already been ordered together with the first six Gripens, while the second is included as an option with six additional fighters, replacing aging F-5s. Previously, similar configurations were used with the Saab 340 and Embraer 145. Saab is currently promoting the longer, more spacious Saab 2000 platform for a wide range of special missions, as an attractive, cost effective solution for airborne early warning (AEW) missions. 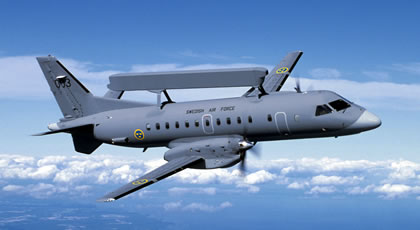 According to Matthew Smith, Director of Marketing – Airborne Surveillance Arena at Saab, these special mission platforms are derivatives of the regional airliner, including the Saab 340 and the larger Saab 2000 platform, which provides more spacious cabins, long-range and persistence at an affordable cost. The company proposes the smaller Saab 340 as Maritime Patrol Aircraft (MPA) search missions, while the larger Saab 2000 is better positioned for longer range MPA, as an AEW, carrying the dorsal Erieye radar and ESM system. The Saab 2000 is also positioned to carry signal Surveillance, Targeting, Acquisition and Reconnaissance (SIGSTAR) mission.

The Saab 2000 platform has a cruising speed of 370 knots, it can climb to an altitude of 20,000 ft in 10 minutes, reaching operating area 1,000 nautical miles afar within three hours. It can operate from high altitude airfields, taking off with maximum load and fuel even at hot temperature. Flight safety is maintained throughout all flight conditions, including single engine operations, where the aircraft can maintain altitude at 20,000 ft. To extend mission endurance, Saab packed an extra fuel tank at the rear section of the cabin. For example, in the MPA and SIGnal Surveillance, Targeting, Acquisition, Reconnaissance (SIGSTAR) missions, the Saab 2000 platform can operate at a maximum range exceeding 2000 nautical miles, on a mission endurance exceeding 9.5 hours. The MPA aircraft can carry out a mission covering a 200 nm Exclusive Economic Zone (EEZ) for 5.5 hours at an altitude of 2,000 ft. The Saab 340 MPA can operate on shorter missions lasting 3.5 hours. It’s maximum range exceeds 1,300 nm and endurance is about 7 hours. In the SIGSTAR mission, the aircraft becomes operational immediately after takeoff, performing COMINT, ELINT, ESM missions supported by real-time analysis or offline analysis both onboard and on the ground. 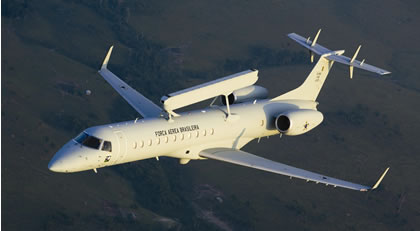 The radar, mounted on the dorsal superstructure is the main sensor of the Erieye system. Operating in AEW missions from an altitude of about 8,000 meters, Erieye can detect targets at distances beyond to 400 km, including aircraft, surface vessels, and even cruise missiles and other low radar cross-section (RCS) targets flying at 200 km range. Surface naval targets can be detected at a range of 300 km.

The cabin accommodates five operator consoles, which can share the operational picture with ground-bound control system via communications and tactical datalink. The spacious cabin has accommodations for rest area and a galley. It also houses a large fuel tank which provides for the extended range and endurance performance of the aircraft. Mission training, planning and debriefing systems are also integrated into the system.

Saab expects to use commercial Saab 2000 aircraft to be converted to special missions, as some of the 58 platforms currently in service are scheduled for major overhaul or modification. Although the company claims the system can be accommodated in other platforms, and has installed the radar on Embraer’s EMB-145, the recently announced alliance between the Brazilian company and India’s Defense Research & Development Organization (DRDO) to develop AEW aircraft based on Embraer’s special-mission aircraft platforms leaves little for future cooperation with Saab.

According to Smith, commercially operated Saab 2000 aircraft have flown about 25% of their life expectancy, leaving 30-35 years of remaining special-mission life span on average. Preparing a platform for the special mission role requires significant modification lasting 6-8 months, including engine refurbishment in cases new engines are introduced, structural strengthening as required, bonded and anodized corrosion protection at manufacture ensures continued corrosion protection in salty environments for maritime operations. Aircraft are also installed with self protection systems (chaff dispenser and ESM pod on each wingtip and chaff/flare dispensers at the belly. Auxiliary power unit and cooling systems are installed at the aft section. The main sensors are located at the belly (MPA) or dorsal superstructure (Erieye) which requires the most significant changes, such as the additional superstructure installation for the Erieye platforms, involving dorsal, tail and wing strengthening, wingtip pods installations, and installations of self protection systems in the wingtip, nose belly and on the engine cowling. 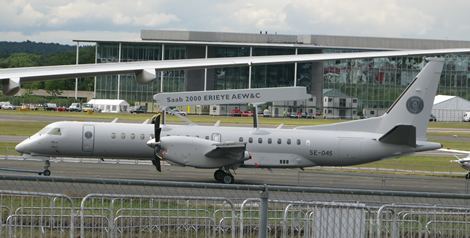