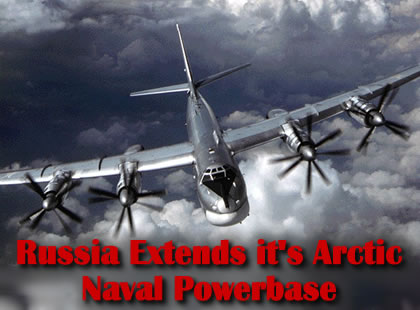 The Russian navy and air force continue to expand their operations on a global base. Their most recent plans call for joint naval exercises, combining naval units, Tu-160 Blackjack and Tu-95 Bear long-range strategic bombers, to be held in Indian Ocean later this autumn.

According to the Russian Air Force commander, Col. Gen. Alexander Zelin, the Air Force had received orders to increase joint training with the Navy and the number of patrol flights across the world’s oceans are aimed, to ensure the security of Russian shipping in it’s national, strategic- and economically important zones.

Last year Russia resumed strategic bomber patrol flights over the Pacific, Atlantic and Arctic oceans. “Since August 2007, Russian strategic bombers have carried out about 150 patrol flights with tactical interference of foreign aircraft, which accompanied our planes on their missions and in some instances jeopardized their success,” Zelin said.

It is of special interest, that in June 2008 two Russian Tu-95 strategic bombers were deployed to the Engels airbase in the Saratov Region, flying routine patrols over the Arctic. One month later, in July 2008, similar patrols were flown by four additional bombers based at the Ukrainka air base in the Far Eastern Amur Region. These aircraft were sent on 14 hour patrol flights over the Arctic and Atlantic oceans. Other missions conducetd last week involved a pair of Tu-160 bombers flying 12 hour missions over the Arctic sea and Atlantic ocean. These patrols provide routine Russian presence in these highly strategic areas, as well as improving the air-crew’s proficiency, in flying and navigating over the vast and featureless arctic region.

The Russian Navy also places more attention on the Arctic region, resuming its regular naval presence in that area, after 17 years of noted absence. In June and early July 2008 the Russian Udaloy class anti-submarine ship Severomorsk entered the arctic circle for about a month’ deployment, replaced by the Slava class missile cruiser ‘Marshal Ustinov’ in mid July.

As Severomorsk left the area it paid a visit to the Norwegian port of Haakonsvern to continue the traditional spirit of cooperation with participation in ‘Northern Edge 2008’ – a tri-national exercise involving the Russian Fleet, US Navy and Norwegian Navy, taking place in the Norwegian and Barents seas. Northern Edge 2008 focuses on maritime interdiction operations, search and rescue and tactical interoperability to improve maritime safety and security in Northern Europe.

Yet, such peaceful spirit is somewhat obscured, by Russian naval patrols around the area of Spitsbergen, claimed within Norway’s exclusive right to the 200-mile economic zone. A subsequent test launch of a intermediate-range ballistic missile (IRBM) from the Delta-3 nuclear powered missile-carrying submarine Ryazan, further raises concern of the Russian intentions. Ryazan is also operating with the Russian Northern Fleet. The launch was described by the Russian Naval comman, as ‘routine check-up of the nation’s naval strategic nuclear forces’, It was fired from a submerged position in the Barents Sea, hitting a target on the Kamchatka Kura training range.

The arctic area is only one of the areas the Russian Navy is expected to operate in. speaking to journalists on the occasion of the Russian Navy Day celebrations, the commander of the Russian Navy, Admiral Vladimir Visotskiy confirmed the the Russian Navy is planning to deploy six aircraft-carrier groups with its Northern and Pacific fleets. They will be operated within a new, network-centric task groups, closely integrated with Russian air force and air-defense assets via Russia’s military-satellite network. At present, the Russians operate a single aircraft carrier Admiral Kuznetsov with the Northern Fleet.