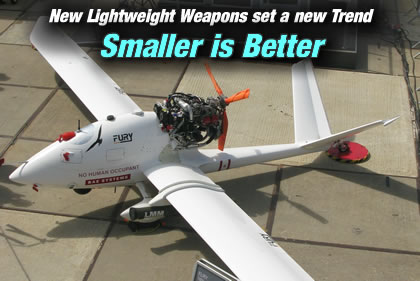 Modern weapons are no longer compared on the size and power of their warheads. In a world where illusive targets take cover amongst innocent civilians, and friendly forces are located across the street or behind a wall, the smaller, more surgical effect a weapon has is better. To successfully engage targets under such restrictions, an attack should be pursued swiftly as soon as a target is exposed and while nearby friendly forces and non-combatant elements are least vulnerable.

Responding to these requirements, weapon manufacturers are offering a new range of lightweight precision weapons, optimized to destroy soft targets, while reducing effects beyond a specified distance. While containing smaller amounts of explosives, such weapons are also designed to have even more powerful effect over a limited area, utilizing ‘enhanced blast’ (thermobaric) explosive compounds, which are particularly devastating indoors. Such materials are being evaluated for future, ultra low collateral damage version of the Small Diameter Bomb (SDB), developed under the US Air Force Focused Lethality Munition (FLM) program developed by Boeing.

Compared to the FLM’s 93 kg blast, low fragmentation warheads, the latest member of this class being displayed at Farnborough for the first time is designed to far more surgical strikes. The new Lightweight Multi-Mission Missile (LMM) developed by Thales contains a warhead weighing only three kilograms. LMM will use laser guidance (beam riding) to fly out to a range of about seven kilometers, where it will activate a semi-active laser or passive infrared seeker to detect the target from a distance of about 1,000 meters. It will then pursue a terminal attack profile, continuously monitored by the operator.

Presently the missile uses blast fragmenting warhead but in the future Thales considers adding an anti-tank dedicated version, fitted with a tandem shaped charge warhead. LMM is designed for light platforms, including light helicopters and unmanned systems. It has been fired from the BAE Systems Herti Unmanned platform and test flown on Scheibel’s S-100 Camcopter unmanned helicopter. Both platforms can carry two missiles each. At Farnborough 08 Thales displays the missile on the AgustaWestland Sea Lynx, where seven LMM missiles are carried by a new launcher weighing about 275 kg.

Raytheon is also developing the Griffin air-to-surface lightweight missile as a private venture. The Griffin is a 45 lb, 42 inch long tube launched missile using semi-active laser guidance. Raytheon was awarded a $9.3 million contract to supply the missiles to equip Predator UAVs operated by an ‘unidentified’ U.S. customer. Each Predator can carry six Griffins, instead of two Hellfire missiles currently carried by the platform.

Another system unveiled here for the first time is the Guided Advanced Tactical Rocket – Laser (GATR-L) developed under a collaborative effort between Elbit Systems and Alliant Techsystems (ATK). GATR-L will introduce a fixed (non gimbaled) semi-active laser seeker and guidance unit to ATK’s 70mm unguided rockets, converting these weapons into precision attack munitions. Such weapons will offer the effect currently achieved by much larger and expensive weapons such as the Hellfire and Maverick missiles, at much lower cost and reduced collateral effect. Similar developments are being pursued by BAE Systems, Lockheed Martin, Raytheon and Kongsberg Defense from Norway.