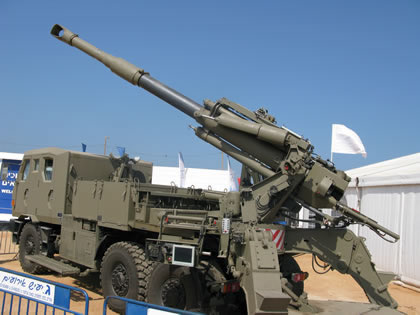 Among the artillery systems shown at the exhibition were the Atmos self propelled, truck based howitzer gun displayed here mounted on an armored Tatra truck. Atmos developed by Soltam, is designed as an autonomous, self-contained artillery weapon system, comprising of the 155mm main gun, semi-automatic ammunition loader and an integral load of 27 rounds. The gun can engage targets at ranges up to 41 km, at an initial rate of fire of 3 rounds in 15 seconds. In fact, a single Atmos barrel can generate the effect of an artillery battery, employing effective and accurate fire on target, within a short period of time. The gun can continue firing at a sustained rate of 75 rounds per hour. The version displayed here was built on a Tatra 6×6 chassis.

While the IDF has yet to determine its level of interest in the program, Soltam has already delivered Atmos guns to several international clients and the weapon is positioned as a leading competitor on a few lucrative procurement programs worldwide. The IDF has fielded the Cardom, an automated 120mm mortar platform, installed on the Keshet 120mm mortar carrier M113. Another artillery system on display here was the Lynx autonomous rocket system from IMI. Like Atmos, Lynx utilizes an autonomous navigation and fire control system to establish the firing position, calculate firing parameters and launch its payload rapidly, dramatically improving its chances for survival.

Extending the accuracy and availability of artillery support, IMI is developing a range of GPS-guided munitions. Under this effort, IMI and Raytheon are cooperating to develope a GPS guided 120mm bomb capable of hitting targets at a range of 10 km with precision level of 1-3 meters CEP.

This capability is achieved by integrating GPS guidance and laser targeting. Course correction and terminal control will be performed by employing four steerable canard fins.

The companies plan to complete the development by 2009. At the exhibition IMI unveiled the follow-on product, currently at an early development phase – a 105mm Guided Artillery Munition (GAM). This GPS guided projectile will complement IMI growing line of 105mm artillery ammuniti