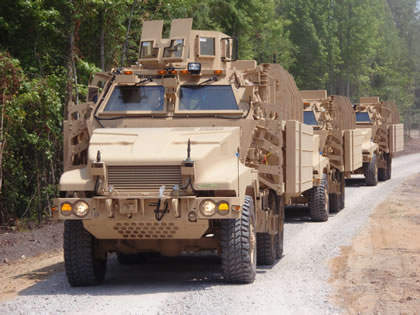 BAE Systems has completed installation of 500 enhanced armor kits on US Army Caiman Mine Resistant Ambush Protected (MRAP) vehicles. The additional armor will be applied to more than half (1,694) of the 2,868 Caimans built for the US Army.

Originally shipped directly to theater for installation, the kits are now being installed in Orangeburg, South Carolina due to the need for more rapid installation. The enhanced protection kits significantly widen the spectrum of threat that Caiman can defeat,” said Chris Chambers, vice president of Medium/Heavy Vehicles for BAE Systems. “We focused on bringing this to our Armed Forces as quickly as possible and have done so. The production of these Caiman MRAP vehicles involves BAE Systems manufacturing sites in Sealy, Texas; Cincinnati, Ohio; Anniston, Alabama and Louisville, Kentucky.

Today, BAE Systems is the exclusive manufacturer of FMTVs and the producer of three Mine Resistant Ambush Protected (MRAP) variants, the Caiman, the RG33 and the RG31. The Caiman is manufactured in Sealy. Due to the need for accelerated installation, in early June 2008 BAE Systems leased a 72,000 square feet facility in Orangeburg, South Carolina, supporting armor kit installations. This facility is adjacent to the Space and Naval Warfare Command (SPAWAR) facility, which integrates electronics into Caiman vehicles. BAE Systems operates another facility in Cincinnati, Ohio, providing armor and transparent armor systems for RG33, caiman and FMTV. In Anniston, Alabama, BAE Systems employs more than 350 people to support forging and vehicle upgrade operations. Since April 2008, the Anniston facility has produced more than 3,000 tons of expanded metal armor XPA used on Caiman, RG-33, and MaxxPro vehicles. A assembly area for the enhanced armor operates in Louisville, Kentucky providing support for weapons system production, repair, and overhaul and is the. Since April 2008, Louisville has delivered over 1,000 enhanced armor kits for MRAP vehicles.  Collaboration between sites allowed the armor kits to be delivered ahead of schedule to ensure armor installation and vehicle fielding as quickly as possible.