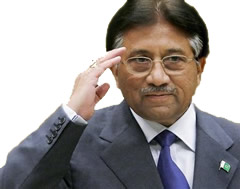 Now that Pervez Musharraf has resigned as the president of Pakistan, America’s global war on terror has gotten a bit more difficult. Musharraf was unpopular in his own country, but he was perceived here as a strong ally of the United States in its fight against al-Qaeda and the Taliban in Afghanistan. But was he a dependable ally, or did he play both ends against the middle? After all, it was the Pakistani military intelligence service, the Inter-Services Intelligence Directorate, which played a major role in the creation of the Taliban and was a key supporter of al-Qaeda since its inception in the late 1980’s.

Various Islamist groups in the country were infuriated by his turn to the West and seeming treachery towards the Pashtuns that inhabit the Northwest Frontier Province, and North and South Waziristan. Not only was Musharraf perceived as turning against his own countrymen, but turning against his fellow Muslims as well. But the Americans, Musharraf, was critical to early American successes against the Taliban and al-Qaeda in Afghanistan. Due to years of criminal neglect, the CIA and other western intelligence organizations were virtually “blind” in this turbulent region, which they regarded as secondary, after beating the Soviet invasion two decades before, with the very people which they were now fighting. And so, it was only a matter of time, before Musharraf and his associates would become the target and ire of the Islamists and seek ways to survive the riddle they had created themselves.

Even Musharraf himself largely failed to live up to his commitment, to the increasing frustration of American officials, who invested $12 billion in assistance to Pakistan. In fact, while forging a personal bond with US President George W Bush, which assured American support for his very survival, US Intelligence raised increased suspicions that he was actually playing a double game. He pretended to condemn terrorism and religious extremism. In his televised address to his people on January 12, 2002, he described terrorism as an absolute evil, whatever is the cause, but, in practice, he made a distinction between terrorism directed against India and Afghanistan and terrorism directed against the US.

He was more active against Al Qaeda, which threatened the US directly, than against the Pakistan-based terrorist organizations, which threatened India, and against the Taliban, which threatened Afghanistan. He helped the US through limited operations against Al Qaeda infrastructure in Pakistani territory, but refrained from even such limited operations against the jihadi infrastructure directed against India and Afghanistan. This was to become a major stumbling block in NATO’s efforts to fight effectively in the cross-border war, which has escalated over the last years. In fact, many incidents occurred in various locations, which increased this unrest, leaving Washington wondering which side the Pakistan administration was really on. Indeed, according to latest US Intelligence assessments, the Taliban and Al Qaeda, are now more deeply entrenched in Pakistan’s tribal areas than they were several years ago. They are exacting an increasing toll on American and NATO forces across the border in Afghanistan.

The rejuvenated Taliban now virtually control Pakistan’s tribal region bordering Afghanistan, and are pressing into the rest of the country, threatening the stability of the nuclear-armed nation of 165 million. About half the military aid was supposed to be spent on bolstering the counterinsurgency skills of the Pakistani Army, but much of that money never reached the military and was actually funneled to the very people they were supposed to fight!

Most surprisingly, the Bush administration chose not to complain, keeping this outraged conduct under it’s hat, according to a Congressional investigation published earlier this year. But Washington finally lost it’s patience. In a diplomatic showdown, the Pentagon and the CIA confronted the country’s new Prime Minister, Yousaf Raza Gilani, with evidence that the Pakistani intelligence service helped plan the July 7, 2008 terrorist attack against the Indian Embassy in Kabul, Afghanistan, an outrage in itself, second to none.

But there is much more at stake since General Musharraf has left the scene in Islamabad. Barely a week after his resignation, the coalition that forced him out had already collapsed, confirming that all that united them was opposition to the general, and that this was really a three-sided power struggle.

Pakistan, which has already lost control of its western frontiers, now risks seeing its federation disintegrate. Without Musharraf’s iron grip, total turmoil is in sight. At the same time, an indigenous Taliban – part provoked by hostility to Pakistan’s alliance with the US, part nurtured by the Pakistani army’s and intelligence services’ licensing of jihadi proxies – threatens to spread the war in Afghanistan across Pakistan.

The real nightmare scenario for U.S. policy makers—and one reason they remained so heavily invested in a questionable Musharraf – is an Islamic revolution in Pakistan. A tide of anti-American sentiment, some analysts fear, could bring to power Islamists, who would give free rein to the Taliban, spread nuclear technology to rogue states and terrorist groups, and support the mujahideen, among others, in Kashmir, creating a highly dangerous escalation in this already hughly tense region

There’s no doubt that Islamists have grown in numbers and prominence in Pakistan since 9/11. In 2002, six fundamentalist parties formed an alliance called Muttahida Majlis-e-Amal, or MMA, and rode a wave of anger at the American-led war in Afghanistan, taking 53 of the 342 seats in the National Assembly and forming the third-largest bloc in the parliament. The alliance won outright control of the provincial assembly in the North-West Frontier Province.

Much depends on the outcome of the next US presidential elections.

Describing US President George W Bush’s war on terror as “flawed”, Democratic Presidential candidate Barack Obama saidin his acceptance speech, that while America has got bogged down in Iraq, the real threat to Washington’s interest remained at large in Afghanistan. Asserting that he intended to end the war in Iraq “responsibly”, Obama, the first African-American to have a shot at the White House said his security policies would be aimed at finishing the fight against Al-Qaeda and the Taliban in Afghanistan.

These are big words indeed, but they hardly indicate a marked shift in Washington’s overall strategy in fighting the Afghan War, nor a determined warfighting policy against Islamic global terror. Without a radical change of policy towards the new rulers in Islamabad, whoever they may be, Washington cannot hope to win this war, nor signal to the jihadists that their time has come.