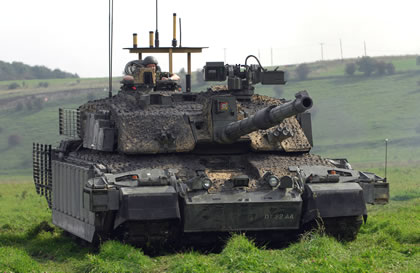 Among the vehicles displayed was the new Ridgeback Personnel Protected Vehicle, which is a smaller version of the popular Mastiff that is already in used in both Iraq and Afghanistan. The new Snatch-Vixen, an upgraded version of the armored LandRover uses heavier axels to carry additional armor and more payload in theatre. The vehicle also has better mine protection. The RWMIK with its new built in armor was on display and the new Jackal, which has been deployed in Afghanistan with 16 Air Assault Brigade’s Pathfinder Platoon and the Household Calvary Regiment.

The new command vehicle ‘Panther’, was also on display. Panther is completing acceptance tests and will soon be delivered to deployed units. There was also the 3 variants of the new Man Trucks on the Demonstration.

Other up-armored configurations of weapon systems on display included the AS90 Self Propelled Gun, the Multi Launch Rocket System (MLRS), the upgraded Combat Vehicle Reconnaissance (Tracked) Scimitar and Spartan. (left).

Among the vehicles currently operating in theater were the Viking, Challenger Armored Repair and Recovery Vehicle (CRARRV) and the new Engineers Terrier Vehicle. 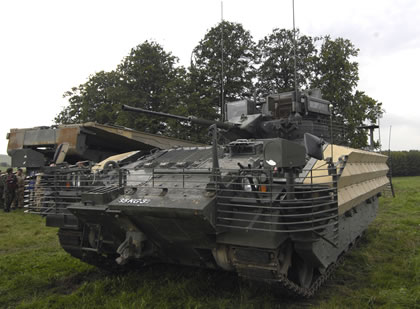