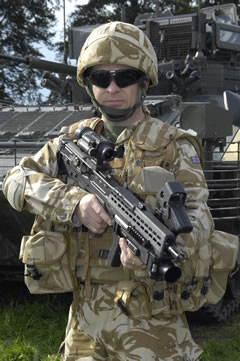 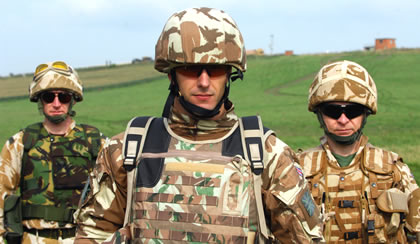 Royal Marine Lieutenant Colonel Paul Kearney Kearney explains: “Five years ago everyone had an SA80 Rifle and occasionally a Light Support Weapon. Now we have MIMIMI Light Machine Guns, and Under-Slung Grenade Launchers which give us the ability to pop things over hills rather than fire straight. It’s much safer to fire from behind a rock. The thing about weapons systems now is they are much safer for us as it allows us to choose the best weapon for every specific situation.” The upgrading of SA80A1 into A2 version was part of the UOR process. An important part of this upgrade was the integration of new night fighting capability.

“Protection and firepower have increased immeasurably but it is a genuine night fighting capability that takes modern infantrymen to the next level,” says Lt. Col. Kearney. “Five years ago individual soldiers were issued with Sight Unit Small Arms Triluxs, Image Intensified Common Weapon Sights and Binoculars. Now they also get Advanced Combat Optical Gun sights, Thermal Imaging Systems, Head Mounted Night Vision Systems, VIPER 2+ Thermal Imaging Weapon Sights, and Target Locating Systems. “Target Acquisition and night fighting capability. That’s the thing that really sets us apart. You can go in at night and they can’t see you. Being able to hit the enemy where it is really vulnerable, that saves lives. “In a low tech counter-insurgency it is technology that gives British soldiers the edge in combat. This ability now means that routine infantry soldiers now have a capability that was previously the exclusive preserve of Special Forces.”

Other elements in the improved gear include the Mark 6 Helmet which gives far better ballistic protection than previous designs. Better eyewear protection is also available. Soldiers are using stylish ballistic protection goggles from ESS or OAKLEY which instead of the plastic goggles and plastic sunglasses, offering much greater fragmentation protection.