BAE System’s Herti Unmanned Autonomous System (UAS) is positioned to assume an expanding the range of applications, from commercial missions such as pipeline, plant and infrastructure surveillance, through to maritime, coastline, border and military surveillance, and even armed reconnaissance and close air support.

The armed version of the Herti, dubbed ‘Fury’ is the latest version of the British unmanned system, made its public debut on static display at Farnborough this year. Sharing a similar airframe and some vehicle system components with the Herti reconnaissance and surveillance UAS, Fury features the latest generation mission systems avionics, a newly developed stores management system and a proven weapon guidance system.

The system has been developed and trailed in partnership with Thales UK’s missile business in Belfast, Northern Ireland. It is armed with the new Thales Lightweight Multi-role Missile (LMM) system. These missiles were selected for Fury due to its suitability for lightweight maneuverable platforms, and for its ability to fire on the move while delivering significant precision effects. BAE Systems’ project director Chris Clarkson describes the new Fury as an affordable, reliable and highly accurate weapon system capable of operation from forward locations, with small logistic footprint and low operator workload. In the current configuration, the aircraft carries two LMM pods fitted under a new patented pylon design enabling the wing that was not originally designed to carry external stores to maintain its strength and flexibility while carrying these loads. 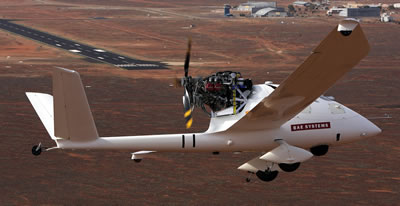 Preparing the Herti to pursue the new missions, BAE Systems is modifying the experimental system into a robust, production standard aircraft capable of autonomous, reliable and safe operation. The new airframe is being manufactured by Slingsby Aviation in the UK, based on an original design by J&AS Aero Design of Poland. A key element in the new platform is the BAE Systems-developed flight control system and new avionics suite, designed for improved operational capability and a high level of system redundancy, as required for operation over populated areas. The production standard system also includes lightning protection and a full night flying capability which reflect its ability to provide persistent surveillance in all weathers. “Herti is an affordable UAS, built to meet operational needs, but with the flexibility to meet emerging and future requirements” says Andy Wilson, Business Development Director Utility UAVs at BAE Systems.

Herti was developed by BAE Systems as one of a new generation autonomous UAVs suitable for both military and commercial operations. When coupled with BAE System’ Imagery Collection & Exploitation (ICE) system, the aircraft can provide imagery and intelligence collection services maritime, coastline and border surveillance as well as showing broader potential for areas such as pipeline, plant and infrastructure surveillance.

Herti was developed as a concept demonstrator system, first flown in December 2004 using off the shelf systems, power-plants and ground stations, developed for other BAE Systems UAV programs. At Farnborough 2006 BAE first displayed a production configuration of the vehicle. The UAV took part in the UK MOD’s Coalition Warrior Interoperability Demonstration (CWID) at Portsdown in June 2006, where the system demonstrated its ability to integrate with the networked environment, supporting the generation of a single integrated surface picture by multiple, networked sensors. In September, 2006 the Royal Air Force’s Air Warfare Centre Unmanned Air Vehicle Battlelab (AUB) launched a joint project with BAE systems, to test the HERTI in various military exercises over a two-year period. In 2007 Herti was tested in Australia, demonstrated during an international ‘world tour’ in Singapore and Central Asia, where it was evaluated with British forces operating in Afghanistan for a short time in early 2008.