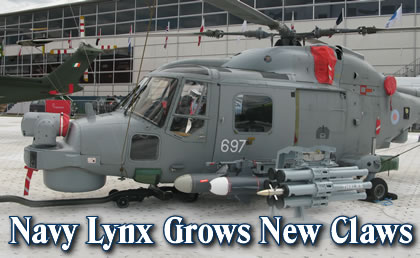 The UK’s Future Air to Surface Guided Weapon (FASGW) is being developed as a family of guided weapons comprising of a light and heavy missile systems, improving the Royal Navy’s armaments to equip the future Naval Vertical Lift aviation systems. In the immediate term, FASGW will improve the firepower and effectiveness of the Royal Navy ‘Surface Combatant Maritime Rotorcraft program’ (SCMR), currently consisting of the Sea Lynx carrying the Sea-Skua missile.

MoD considers meeting the broad FASGW requirements with modified versions of existing missile systems, comprising the Lightweight Multi-Role Missile System (LMM) anti-material guided missile rocket developed by Thales UK (designated FASGW-Light). The lighter version will utilize a modified Thales ‘Starstreak’ missile system, to be used primarily against small surface targets such as rubber dinghies or for precision attack of unprotected targets on board surface vessels and on land. For the heavier weapon, MBDA’s Sea-Skua IR missile represents the heavier weapon class, offering longer range and effective anti-ship capability required by FASGW (Heavy). The combination of FASGW Light and Heavy is expected to be capable of defeating the wider threat target set encountered in today’s maritime and littoral theatre of operations.

As part of the CW Assessment Phase the Lightweight Multi-role Missile (LMM) is being designed by Thales UK’s Belfast site, with low cost being one of the key drivers. The missile uses proven laser beam-riding guidance and propulsion system derived from the Starstreak air defense missile. Unlike the Starstreak employing the kinetic energy of the sheer impact as kill mechanism, LMM uses a small explosive charge in the warhead, to engage small targets at sea, on the ground, or in the air – anything from FIAC/FAC, landing craft to wheeled or medium armored tracked vehicles to unmanned air vehicles (UAVs) and helicopters. The missile is designed for use from very small platforms, including airborne UAVs, and has zero recoil when fired. It was recently demonstrated fired from the Fry UAV system, a derivative of the Herti UAV.

The missile, sealed in its canister, consists of a two-stage motor, warhead and safe arm unit, together with guidance and control equipment. Skid to turn commands to the canards in the nose give extremely accurate guidance of the missile. The blast fragmenting shaped charge warhead, coupled with the proximity fuze, provides the required level of lethality against the target set defined for the weapon. The system will also be offered with a family of warheads to provide maximum effect against the wide target set out to ranges of around 8km. Initially the missile will be offered with laser beam riding guidance but there will also be a semi active laser (SAL) variant.

As part of the FASGW Assessment Phase MBDA is leading the design of a new 100kg modular, infrared-guided weapon based on the Royal Navy’s Sea Skua lightweight anti-ship weapon system capable of sinking or disable Fast Attack Craft. Preliminary work based on the Sea Skua 100kg concept is currently underway. Implementing modular modifications to the current weapon, FASGW (H) is expected to be available from around 2013.

Development of the FASGW (H) could be part of a cooperative development signed by the governments of France and the UK. The French requirements for ANL (Anti-Navire Légère) are similar to the British MoD FASGW (H) category. Furthermore, the two schedules of the programs could be merged quite easily as both services anticipate the weapon to become operational by 2015. France expects to deploy its ANL weapon from its NH90 and Panther helicopters.

Sea Skua entered service with the Royal Navy in the 1970s as a lightweight anti-ship weapon system for fast helicopters such as the Westland Lynx. Combat tested during the 1982 Falklands war and subsequent campaigns in the Persian Gulf.

The target set for the new missile encompasses the Fast Attack Craft (FAC) class from approximately 50 tons up to 500 tons and extends to larger targets such as Corvettes in the 1000 ton class. The extended range capability enables the helicopter to remain safely outside the enemy air defense range, a limit that continues to grow as air defense systems and their proliferation develop. The new missile will weigh about 100kg class and carry a blast fragmenting warhead weighting about 40 kg. FASGW (H) will have the general external dimensions and mass similar to the current Sea Skua, allowing existing ship storage and transportation to require no modification. However, the new weapon will have significant advantages over the current Sea-Skua, capable of operating at a range almost doubled over the current missile. The FASGW will also introduce the capability enabling the operator to select the precise target aim point for optimal terminal effect. The seeker option will allow a target image to be relayed via a data link to the operator. This image, coupled with the two way data link, will enable the operator to make changes to the missile flight right up to the point of impact. This facility allows the operator to decide whether to simply disable the target or destroy and sink.

FASGW (H) will establish the basis for subsequent weapons offering extended range and capabilities, primarily the future air-to-ground missile known as SPEAR 2 (Selected Precision Effects At Range) which is expected to equip British strike fighter force in the next decade.