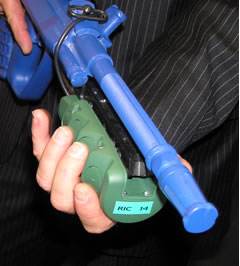 Today’s soldiers are required to operate a number of electronic devices – each with its own functionality and controls, all that, without taking hands off the weapon and eyes off the performing task. Thales Australia and Kord Defence are developing a rifle input control (RIC) interface, adaptable to various rifles which enables warfighters to do this virtually impossible task. The weapon mounted pushbutton controller provides fast, one-hand and ‘eyes free’ access control of a range of devices directly from the weapon. RIC’s three- or five-button controller attaches to the front of the rifle.

The system is based on the patented Chordic Graphical User Interface (CGUI) technology developed at the Australian Institute of Marine Science, and already used to control the Royal Australian Navy’s Mine warfare Underwater Combat Systems (MUCS). The system preset functions are triggered by different combinations of a several pushbuttons (called chords). RIC contains a programmable microprocessor that translates these codes to interface with a range of electronic devices, including thermal weapon sights, infrared sensors, night aiming devices, laser rangefinders, radios, computers etc. For beginners, RIC will display a small on-screen symbol to show which button was pressed. After a relatively short time, the soldier remembers the combinations from muscle memory allowing the interface to operate ‘eyes free’.

Audio and coice prompts can also be used to enhance this capability. RIC can be used with gloves, by left or right handed operators. It uses wired or wireless configuration and runs on a battery that can last for three years. Currently in prototype form, RIC is undergoing lab and field evaluation throughout 2007 and, by mid 2008 Thales plans to have the pre-production units ready for the Australian Styer assault rifle. It will also be adaptable for the M4 carbine, MP-5A and M-16 and, with future modification, RIC will get a universal mounting enabling integration into any weapon having a lower picattiny rail. 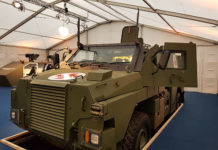 Thales Introduces a Protected Ambulance Based on Bushmaster MR6