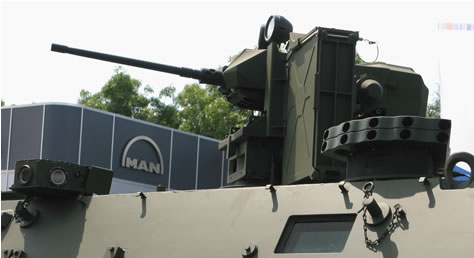 Among the features offered by SAS is the capability to blend images as ‘picture in picture’ viewing, displaying selected areas of interest while maintaining coverage and target tracking over the entire circle around the vehicle. The company offers an optional use of uncooled thermal cameras replacing the color video sensors, as well as optional recording, and interfaces with the vehicle fire control system and with the unit’s command and control system. The system enables the crew to monitor the vehicle’s surrounding, detect movement in its vicinity and track potential targets on the system’s main screen. SAS can hand over target directions to on-board weapon stations and the SKWA-360 rotatable countermeasure pedestal, releasing grenades, CS or smoke countermeasures. Another sector-covering systems are the Rosy, firing non lethal 40 mm ammunition such as teargas and rubber-bullets.