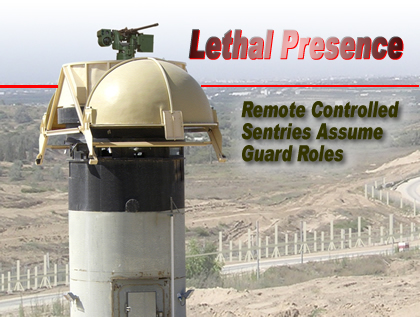 While the US Army and Marine Corps have ordered the CROWS and CROWS II remote weapon stations for their armored fighting vehicles, patrol vehicles such as the MRAP and HMMWVs are commonly equipped with much heavier, tall and more vulnerable Gunner Protection Kit (GPK). While common with US forces, GPK hasn’t become popular with other NATO armies, where RWS systems are favored. Most European armies are adopting versions of the RWS Protector made by Kongsberg Defense or the Samson, designed by Rafael and produced locally by several European manufacturers. 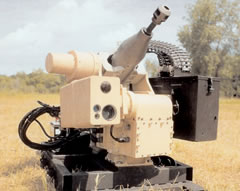 Remotely operated weapons (seen on the picture at right) are becoming popular not only on vehicular platforms, but in stationary positions, where they are used as integrated sentries, offering both observation and target engagement by direct fire. One such example is the Super Sanger, supporting British forces in Afghanistan.

A modular concept of Remotely Operated Weapon was introduced by ATK at AUSA 2008. The system utilizes the Palletized Autonomous Weapon System (PAWS) – a self-contained autonomous armament package scalable for specific mission requirements. The system employs an ‘off the shelf’ weapon station (ATK demonstrated the system with the Raven 400 model), mounting different types of small and medium caliber cannons, particularly ATK’s series of automatic cannons. The PAWS is designed for simple roll-on/roll-off deployment. Within 10 minutes the system can be unpacked, dismounted from the carrier platform and placed in position and become ‘ready to fire’ by remote control. Several PAWS systems can be networked together to enhance coverage, versatility and sensor/weapon interoperability. PAWS can be deployed on ground positions, vehicles, boats, aircraft and helicopters. The system can be configured to run on batteries located on-board or by external power source. The ammunition is also fed from on-board containers.

Sentry-Tech Protecting Hot Borders
A typical example of networked remotely operated weapon system developed by Rafael for the Israeli Army is already operational along the Gaza border. Deployed on pillbox towers along the border fens ‘Sentry-Tech’ weapon stations mounting machine guns are guarding this hot border line. The systems’ role was described as ‘instrumental’ in the Israeli effort to eliminate Palestinians Hamas operatives from approaching the border, laying ambushes, mines and improvised explosives (IEDs) and target Israeli border patrols. Sentry-Tech units are remotely operated from the operational command center by observers that are routinely monitoring the border line. Targets detection is handled as usual, by the different ground and airborne observations. As targets are detected and within range of Sentry-Tech positions, the weapons are slewing toward the designated target. As multiple stations can be operated by a single operator, one or more units can be used to engage the target most effectively. If the target is valid and situation meets the rules of engagement, the firing the weapon is approved.

This process took too long in the past, as different forces in different locations, services and domains had to be integrated ad-hoc. With the new system all the process takes place in a single room, enabling an almost immediate response while maintaining strict control and authority of the entire process.

Before deploying the remotely operated weapons observers played a supportive role, with limited effect. While they could effectively detect, locate and track suspected targets, handoff of such targets to the ‘shooters’ proved too lengthy and complex, a process that frequently eliminated the chance to act, as the target disappeared or changing situation would risk unacceptable collateral damage. Absent of weapon capability.

Enabling observers to employ synchronized firepower transformed the observation post into an integrated ‘sensor-and-shooter’ platform – capable of assuming some of the risky tasks previously done by rapid reaction forces and aerial attack platforms.

The first prototype Sentry-Tech system was tested in 2004. After a successful evaluation, Rafael was contracted to build multiple systems to equip the Gaza border line. Sentry-Tech utilizes Rafael’s Mini-Samson weapon station installed in fixed installation in Pillboxes or relocateable tower systems. Each unit mounts a 7,62 or 0.5″ machine gun, shielded from enemy fire and the elements by an environmentally protective bulletproof canopy. The system is primarily operated by remote control but can also be operated manually when required. The system mounts the observation equipment and communications link to the sector’s operations command center. Sentry-Tech empowers the observers with precision attack lethality, dramatically increases their ability to close kill chains, engaging targets immediately as they are exposed. In addition to the use of direct fire machine guns, observers can also employ precision guided missiles, such as Spike LR optically guided missiles and Lahat laser guided weapons.