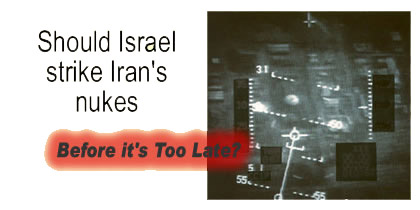 The eight-week gap before the new United States presidential staff enters the White House in Washington, is already causing jitters among defense analysts, speculating if Israel, itself suffering from an acute leaderless pre-election crisis, will take action on it’s own against the Shi’ite Mullah’s in Tehran, before it will be too late. Last week has already become deluged with highly speculative assessments, creating an atmosphere over an alleged Israeli pre-emptive strike on Iran’s nuclear sites.

Quoting each other, Israeli and foreign newspaper editorials, have hastened to interview senior officers and government officials, some of which, quite recklessly said that Israel is preparing a wide range of options for such an operation. One anonymous defense ministry official went as far as to warn, that, while it would always be better to co-ordinate an attack with the United States, Israel was preparing options which “do not include such coordination”.The Jerusalem Post quoted, what it named ‘a top Israeli official’, who allegedly said that it would be difficult, but not impossible, to launch a strike against Iran without receiving codes from the US Air Force, which controls Iraqi airspace.

It is already well known, that during Operation Desert Storm 1991, when Israeli cities were bombarded by Saddam Hussein’s Scud missiles, Israel officially requested the Pentagon to grant it access to the US Air Force secret codes, which would enable it’s aircraft to enter into the warfighting air space over Iraq. The Pentagon flatly refused and Israel’s jets remained on the ground and Israel quietly endured the Iraqi missile offensive until the war ended.

Senior defense analysts warn of a wide range of risks, should Israel opt to embark on such an operation, without coordinating it’s ingress flight-routes over Iraq or, for that matter any airspace in which US aircraft are operating.

It was therefore quite surprising to read, what Israel’s Air Force chief, Maj.-Gen. Ido Nehushtan told the German weekly ‘Der Spiegel‘, last month. In this exclusive interview, the general was quoted saying that ‘the IAF was preparing for a wide range of options, adding that all it would take to launch an operation was a decision by the political echelon’. Asked if the Israeli army is preparing itself for a possible military strike on to stop Tehran developing a nuclear bomb, the general said “We are ready to do whatever is demanded of us. All options are on the table” the general stated allegedly .

Fortunately, a senior Israeli defense official, questioned by the London ‘Times’, quickly cautioned that Israel could not risk an operation which would only partially succeed. Even if successful and carried out with proportionally accepted losses, a partial attack would leave Israel open to a devastating, even possibly, non-conventional response from Tehran, We would likely need the support and backing from our Western allies to carry out such a complex and highly dangerous operation, the official said. ” The US Air Force controls the Iraqi and Persian Gulf airspace, which Israel’s jets would have to cross on a bombing mission and access to codes from the Americans, would “significantly improve” Israel’s chances of a successful strike on Iran”, the official told The Times. He added that because the Iranians have been moving the bunkers deep underground, sophisticated weaponry would be needed to successfully destroy the facilities. Responding to reports that Israel would use low-yield nuclear “bunker-busters”, the official said these reports were largely speculative and totally unreliable.

Responsible analysts in Israel have repeatedly warned that Israel would not enter into a high-risk ‘va banque’ adventure, by attacking the Iranian nuclear sites alone. There are too many risks involved, primarily military, but no less political constraints which cannot be overlooked.

In fact, Washington seems to be highly aware that a political situation in Israel’s pre-election period could enhance an opportunistic venture, which could spell disastrous consequences, not only to Israel itself, but could throw the entire region into uncontrollable turmoil. Precisely to avert such a dangerous situation from developing, Washington has recently made an unprecedented gesture, which was highly regarded in Israel as enhancing it’s anti-ballistic defense. But there may be more than meets the eye in this unexpected generous gesture.

In September, a Defense News article on an early warning radar system the US recently sent to Israel quoted a US government source who said the X-band deployment and other bilateral alliance-bolstering activities send parallel messages: “First, we want to put Iran on notice that we’re bolstering our capabilities throughout the region, and especially in Israel. But just as important, we’re telling the Israelis, ‘Calm down, behave. We’re doing all we can to stand by your side and strengthen defenses, because at this time, we don’t want you rushing into the military option.'”

It may indeed already have a calming effect in Israel.

Israeli officials said last week that the drop in oil prices and the continued sanctions on Iran were having an effect, although they had yet to stop Teheran’s nuclear program. The officials said that while Iran was making technological advancements, it would not have the necessary amount of highly-enriched uranium for a nuclear bomb until late 2009. “There is still time and there is no need to rush into an operation right now,” another Israeli official said. “The regime there is already falling apart and will likely no longer be in power 10 years from now .”