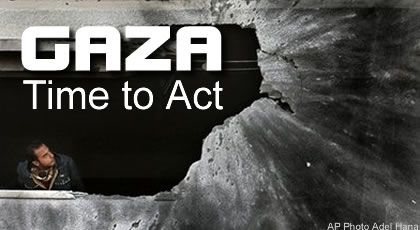 Israel should Hit Hamas Hard Before it is Too Late

No sovereign state or democratic government can disregard its duty to protect the physical security of its citizens over an extended period of time. After maintaining a long period of unbelievable restraint and indulgence to one-sided violence against it’s civilian population, living peacefully in internationally recognized territory, Israel is forced to stop, once and for all, the rocket bombardment, which has turned life around the notorious Hamastan-ruled Gaza Strip into living hell. It is the unfettered duty of a national army to defend its citizens and that is what the government should order it to do, without further delay.

The rules are quite simple to follow: It is the duty of the political leadership in a democracy, to give the army a clear directive, which in this case should be “Stop the firing on Israeli civilians”, using every means which is acceptable under law. Based on this directive, which presents the strategy, the military must form it’s

best method, using sufficient force to achieve this objective within minimum time and space and with acceptable losses to it’s own forces and uninvolved enemy civilians.

The latter poses, in this case, being densely populated Gaza, extreme challenges in planning and execution of this highly sensitive task. But sufficient pre-mission training, excellent drills and control procedures, constant situational awareness and top quality leadership can render such complex operations successful.

The IDF has a proven record in achieving such results in the past. The present IDF under the leadership of Lt General Gabi Ashkenazi has undergone rigorous training procedures after the Second Lebanon War fiasco and should now be fully capable of carrying out a successful operation in Gaza and, if necessary simultaneously on the northern front, if Hezbollah should enter into the fray.

There has been some public outcry that a large-scale military operation into Gaza could jeopardize the live of Corporal Gilad Shalit, held captive for over two years by Hamas, hidden somewhere in the Gaza Strip. While every life is always precious, especially to his loved one’s, all deeply concerned over his personal fate, considerations, like the safety of a single soldier held captive by the enemy, cannot become a decisive factor in the nation’s strategic aims. Moreover, both the political and the military leadership should have long ago taken urgent steps to release, or rescue it’s soldier. This was the ultimate duty of the political leadership and a top priority item of the military staff.

It is therefore unacceptable that military intelligence, ISA and Mossad andSayeret Matkal (GHQ special forces unit), could not find his hideout, long ago and mount a successful rescue operation, attempting to release him, from within the confines of the Gaza Strip, being only a few kilometers away. Arguments, aired, that such a rescue mission would be dangerous and probably cost the life of the soldier, are reasonable, but must be part of the overall decision making process. An entire nation cannot be held hostage over the fate of a single soldier and even his next of kin must accept the possibility of his or her son being killed in action, once he joins active military service. One tends to forget, that two of Shalit’s tank crew comrades were indeed killed in the same action at Kerem Shalom in 2006!

It takes a lot of guts ordering to mount a daring, high-risk rescue mission, the success and failure is often less than 50%, sometimes near nil. However courageous leaders are willing to take the risk for the sake of troop morale, which is a primary element in combat motivation. The operation has a chance to succeed, if well prepared and carried out with sufficient ruse, professional deception and surprise. What about the extraordinary risks taken at Entebbe, Maalot and even the late Nachshon Wachsman* rescue attempt which both failed, but at least demonstrated determination and courage by the decision makers.

As for the oncoming Gaza Operation, it stands to reason that Israel is planning a relatively short operation that will cause maximum damage to Hamas “assets. For it’s success, the less spoken about, the better are it’s chances to hit their mark with acceptable hitches.

The IDF chief of staff has constantly demands that the political leadership formulates clear objectives for a Gaza Strip operation – also known as an exit strategy – it now seems that this has been given. The realistic objective of any military operation should not be the ousting of Hamas, which needs excessive time and means, but rather, the undermining of its military capabilities and weakening its regime. Such an operation must end with a clear bilateral truce based on terms Israel can live with.

The IDF should be delivering powerful surgical blows, simultaneously, from the air on the ground and from the sea, against selected prime targets in the Gaza Strip in a manner that would heavily jeopardize the Hamas regime in Gaza. For months, military analysts have predicted that Hamas was creating a full-scale army in the Gaza Strip. This may of course create substantial difficulties against a massive Israeli ground operation, if conducted according to expected military procedures. However, if reliable, accurate and as far as possible, real time intelligence is available, then fighting against an enemy who has known and identified military installations, can achieve substantial results, even of strategic value.

Targets, such as training camps, supply depots, weapon construction facilities, command and control centers – can all become legitimate high value targets, which once destroyed weaken the former guerilla organization considerably. Moreover, by targeting known senior leaders, a military-like organization can quickly lose cohesive function, if its communications network is disrupted or effectively jammed. One should not forget the immense effect the assassination in 2004, of Sheikh Yassin and his replacement Rantissi had on Hamas’ activities, which virtually ceased for nearly six months!

Hamas and the other organizations will no doubt respond with massive rocket fire at Israeli communities while attempting to carry out other terror attacks. Israel will have to regard a major operation in Gaza as an act of war, enforcing severe martial law concerning civilian defense in all affected areas.

With no further time to waste, Israel must now take initiative, end Hamas’ hold on Palestinian government institutions before it is too late. If the Second Lebanon War paralyzed the Haifa Port, the next clash vis-à-vis the Palestinians could create a similar threat on the Ashdod Port. No sane nation can tolerate such a strategic challenge and remain inactive.

* IDF Sergeant Nachshon Wachsman was killed during a daring rescue operation by Sayeret Matkal to free him from his PLO captors in 1994.