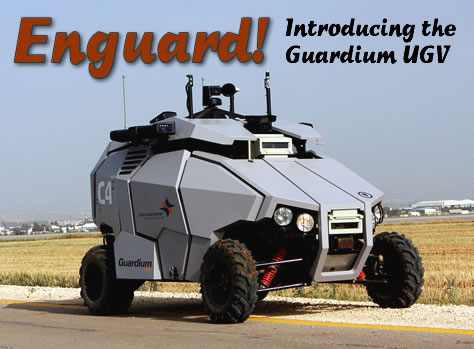 Guardium autonomous observation and target intercept system was developed by G-NIUS Autonomous Unmanned Ground Vehicles joint venture company established by Israel Aerospace Industries and Elbit Systems. The Guardium system employs autonomous unmanned ground vehicles (UGV) which can be operated from a command center, carry out routine patrols and quickly respond to evolving emergencies. They can suppress suspicious elements close to the perimeter, and hold them back until manned security forces arrive, or use various forceful means to eliminate the threat, if applicable. 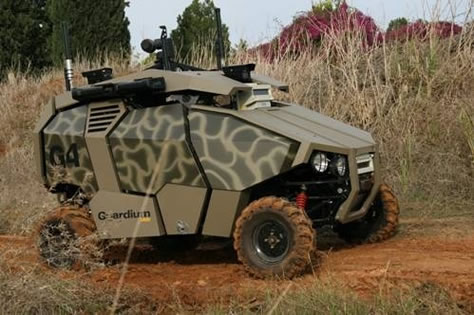 The Guardium UGV uses the TomCar chassis. The vehicle is equipped with an automated tactical positioning system and can operate autonomously on and off road, at speeds up to 80 km/h. The vehicle can carry a payload of up to 300 kg, including light armor shield to protect vital systems. The UGV can carry a wide variety of sensors, including video and thermal cameras, with auto-target acquisition and capture, sensitive microphone, powerful loudspeakers and two way radio. The vehicle can also be equipped with lethal or less than lethal weapons which can be directed and operated from the Main Control Center (MCC). A fleet of Guardium vehicles can be used as sentries, controlled from the MCC, from where they are launched on routine patrols, ambushes or operating in response to events received from an early warning or perimeter defense system. The MCC is also provided with automatic tactical area definition, by terrain, doctrine and intelligence, which assist in preparation of the operational planning and programming for USVs. Each USV can also be manually controlled by remote control.

Following a successful evaluation in 2005 Guardium was selected by the Israel Defense Forces to operate as part of the border security operations. By May 2008 the IDF received the first batch of Guardium UGVs scheduled to enter fully operational service along the countrie’s borders by the year’s end. In 2008 Israel’s Airport Authority conducted an evaluation of the system as part of possible integration of an autonomous UGV as part of its airport security system. 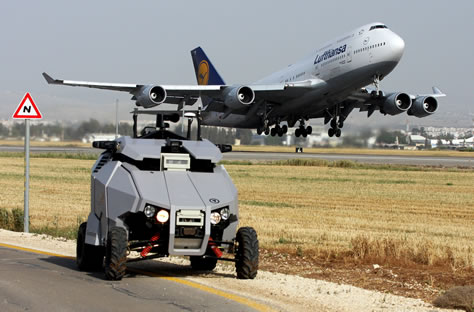