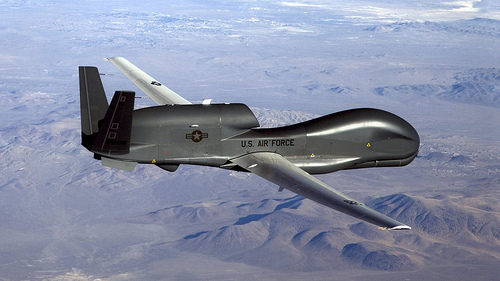 Global Hawk began its ‘career’ as an advanced technology demonstrator (ACTD) that was quickly drawn into combat service supporting operation Enduring Freedom in 2002. Since then, the Global Hawk fleet, which was augmented by the Block 10 aircraft, flew over 16,000 hours logging over 10,000 hours in combat missions. The aircraft demonstrated high reliability, achieving 95.8% effective time on station (delivering the assigned imagery requested), requiring only about four hour turnaround before 24 hour missions. The aircraft demonstrated high reliability and resilience even under emergency situations that involved engine failures and systems faults.

Global Hawks are flying from forward operating bases in Southwest Asia and the Middle East, and controlled via satellite links from mission control center based in their home base at Beal AFB in California. While missions follow a preplanned route, mission control can quickly respond to requests from the anywhere in the world, received via chat, or voice. The payloads on the Global Hawk can be pointed at the requested target, and, if necessary, a diversion is planned and programmed into the aircraft while airborne. The images can be transmitted back to mission control for processing, or relayed directly to the users in the field using Northrop Grumman’s Advanced Information Architecture, enabling users to ‘grab’ only the parts of the image they are interested, therefore saving time and bandwidth. The Global Hawk can stay over the target for 24 – 35 hours.

Currently in production as ‘Block 20’, Global Hawk can carry up to 3,000 lbs (1,360 kg) of payload on a 24 hour mission, compared to 2,000 payload of the Block 10. The growth was required to assume part of the missions performed today by Lockheed Martin U-2R high flying recce aircraft, primarily SIGINT and long range SAR patrols. Six Block 20 aircraft are currently in production and will become operational by 2009. Two years later they will be followed by 16 Block 40 Global Hawks, to be equipped with a new radar known as Multi-Platform Radar Technology Insertion Program (MP-RTIP). These aircraft are scheduled for fielding in Grand Forks air force base in North Dakota. Another payload scheduled to be installed on the Global Hawk is the Airborne Signals Intelligence Program (ASIP) SIGINT payload, capable of monitoring electronic signals up to 500 km away. ASIP will augment the sensor suite used on previous aircraft. The US Air Force plans to field 26 Block 30 aircraft which will share the same platform of Block 20 and 40 but will be equipped with the ASIP systems instead of the standard EO/SAR payload. These aircraft will become operational by 2012 augmenting the units currently operating by the 9th Recce wing at BealE AFB.

As initial Block 20 aircraft are being introduced, improvements are also expected in the sensors suite, as well as ground segments. For example, the checkerboard pattern, sofar indigenous to the Global Hawk high resolution imagery that was ‘stitched’ from multiple 10km wide swaths generated by the Global Hawk imager. Improved imagery and image processing software will soon yield more coherent output, offering seamless stitching and image registration.

The 220 lbs Integrated Sensor Suite (ISS) is based on EO/IR camera that produces still images in two formats – a wide area search, designed to cover about 40,000 square nautical miles per day or ‘spot’ collection mode, focusing the entire sensor on a 2×2 km area. On average, Global Hawk can capture up to 1,900 images per day. Block 20 and 30 aircraft will receive an enhanced ISS, offering up to 50% increase in effective range. The improvement results from a more advanced sensor, mounted on the existing gimbals, introduction of new Beryllium optics, a larger (12.5″) mirror and better stabilization. The SAR will also be improved, increasing operating range by 50%. In some of the future versions the SAR will be replaced by the Multi-Platform Radar Technology Insertion Program (MP-RTIP), utilizing a SAR based on advanced transmit/receive array, designed to handle more power, enable multi-mode operation and faster revisit rate, while significantly increasing resolution while covering larger areas.

A Global Hawk maritime surveillance derivative designated RQ-4N has won U.S. Navy Broad Area Marine Surveillance (BAMS) program. According to Northrop Grumman, BAMS will benefit from a HALE platform, since the whole program could utilize only five orbits operating at a range of 2,000 nautical miles, or even three, operating at 3,000 nmi orbits, thus minimizing the operating bases required for the global mission with assured worldwide access to all mission areas, independent on local operating bases. Northrop Grumman claims that the HALE platform is best positioned to support ISR missions conducted over very large areas, since these platforms can support the highest rate of ‘target revisit’, in order to determine its status, location, heading and intentions.

According to Northrop Grumman, the Maritime Global Hawk offers unique advantages to the BAMS mission. Northrop Grumman claims it will be 76% more productive than the competing Mariner. Furthermore, they assert, since the aircraft will cruise at an altitude well above commercial flights and most military aircraft, the risk of airspace deconfliction is localized only to the events where the aircraft has to descend to lower altitude. Higher altitudes are also more suitable for the Global Hawk’s turbofan propulsion system. Average wind levels at these altitudes are also minimal, further contributing to flight economy.

Euro Hawk is a specially modified international configuration of the RQ-4 Global Hawk high-altitude, long-endurance (HALE) UAS, based on the Block 20 Global Hawk rolled out of Northrop Grumman assembly line in October 2009. The Euro Hawk is designed primarily for signal intelligence (SIGINT) missions, utilizing a payload system developed by EADS Defense Systems (DS). The UAS incorporates the air vehicle and sensors, mounted in six underwing pods, are linked to the ground station, which consists of the mission control, launch and recovery elements provided by Northrop Grumman. The SIGINT ground station receives the data from the airborne sensor, processes and analyzes the data as part of an integrated system solution.

The Euro Hawk is scheduled to enter service just in time to replace the aging fleet of manned Breguet Atlantic aircraft, which have been in service since 1972 and will be retired in 2010. At that time, the Euro Hawk will be undergoing flight testing and is expected to begin operational concept development and evaluation with with the German air force in 2011. Pending a procurement decision and order for four additional Euro-Hawks by late 2012, the delivery of subsequent systems is anticipated for delivery in 2016 – 2017.

Part of the systems, including part of the ground control segment launch and recovery ground segments, as well as air vehicle modifications, flight test and logistics support will be provided by Euro-Hawk GmbH, which will also and act as the national prime contractor for the German MoD, through the entire lifecycle of the program. The company was awarded the $559 million contract for the development, test and support of the Euro Hawk SIGINT system in January 2007.