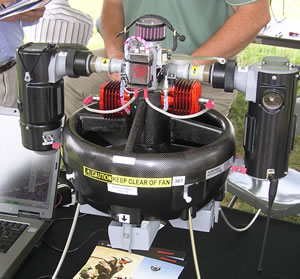 Weighing less than 40 pounds ( kg) the complete system consists of two air vehicles with support equipment of fuel, batteries, an observer/controller unit, remote video terminal and starter. It can be packed inside or on top of a standard Modular LigtWeight Load Carrying Equipment (MOLLE) system. Each vehicle weighs 17 pounds ( kg) fully fueled. The MAV vehicle has a diameter of 13 inches ( cm).

MAV is designed for 50 minute endurance, and can take off and land in wind speed conditions up to 15 knots and fly a mission under wind speed of up to 20 knots, as well as under rain conditions. Service ceiling is 10,000 ft. The vehicle usually operates at altitudes of 100 to 500 feet above ground level, and can provide forward and down-looking day or night video or still imagery. The vehicle will operate in a variety of weather conditions including rain and moderate winds. The MAV uses a small gasoline powered piston engine, driving a counter-rotating ducted fan system. Although the MAV can be quite noisy at close quarters, it is virtually inaudible (60 dBA) at a distance of 100 meters. Steering is performed by flat deflectors controlled by the automatic pilot, which rotate the cylindrical vehicle to the required direction to point the payload at the target, and develop forward thrust for lateral movement and acceleration.

An alternative propulsion system using a micro-turbine, is under development at Locust USA. The current version is consuming slightly more fuel than the piston engine powering the MAV, but is considerably more powerful. A future version of a reciprocating turbine will improve fuel consumption to improve mission endurance and payload capacity.

MAV carries its sensors and datalink in a pod mounted on one side of the vehicle, counter-balanced by the avionics and control pod on the other side. Payloads include a forward and downward looking EO and IR imaging sensors, capable of detecting and recognizing a man-sized target at 250 meters during daylight (125 m at night). Based on its own position and measuring of payload aiming angles, the payload can also extract the coordinates of the target, at a target location error (TLE) of 20 meter. The interchangeable pod uses modular design, accommodating other sensors according to the mission requirement. The MAV is controlled via tough tablet computer converted into a ground control station with an integrated video recorder storing up to 60 minutes of sensor imagery. Operating modes include autonomous flight via dynamic re-tasking and manual intervention, hover and stare and remote launch modes. The system stores up to 100 waypoints in a flight plan. Up to 10 flight plans can be stored on the ground station.

Miniature Turbine Powerplant for the MAV

Locust USA, producers of a family of miniature turbine engines designed for mini UAVs. The company developed several turbines delivering from 5 to 150 shp,
One of the applications of this micro-turbine offers an alternative propulsion system for the Miniature Aerial Vehicle (MAV) Class I UAV developed by Honeywell. Using a micro-turbine, the current version is consuming slightly more fuel than the piston engine powering the MAV but is considerably more powerful. A future version of a reciprocating turbine will improve fuel consumption to improve mission endurance and payload capacity.