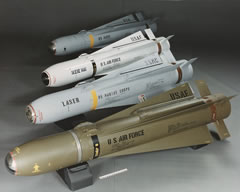 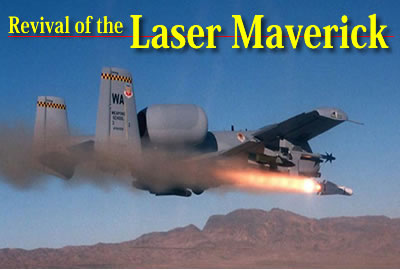 Designed as a modular weapon, the Maverick platform, comprised of a body, solid-rocket motor and aerodynamic controls, can accommodate different guidance and warhead packages to produce a different weapon. The missile employs three different guidance packages – an electro-optical (TV) imaging or imaging infrared (IR) seekers or semi-active laser guidance. Two types of warheads can be used – a 125-pound shaped-charge warhead or a 300-pound penetrator warhead. A contact fuse in the nose fires the shaped-charge warhead while the penetrator uses a delayed-fuse, allowing the warhead to penetrate the target with its kinetic energy before firing. The missile has a cylindrical body with long-chord delta wings and tail control surfaces mounted close to the trailing edge of the wing of the aircraft using it.

The EO and IR guided versions of the missile have “launch-and-leave” capability that enables a pilot to fire it and immediately take evasive action or attack another target as the missile guides itself to the target. Mavericks can be launched from high altitudes to tree-top level and can hit targets ranging from a distance of a few thousand feet to 13 nautical miles at medium altitude.

When engaging the target, the pilot activates the electro-optical television or infrared sensor when the missile is still attached to the launching rail. The pilot views the target scene displayed on a cockpit television screen, selects the target, centers cross hairs on it, locks on, and then launches the missile. Scene magnification capability provided by the missile enables the pilot to identify and lock on smaller and more distant targets. The EO seeker is suitable for daylight attacks under good visibility conditions. The infrared seeker employed in the Maverick D (or the navy model G) overcomes the daylight-only, adverse weather limitations of the A/B systems, and also has the capability to track heat generated by a target and provide the pilot a pictorial display of the target during darkness and hazy or inclement weather. The Navy’s G model’s major difference is its heavyweight penetrator warhead, while Maverick B and D models employ the shaped-charge warhead. The latest versions of the Maverick are the H and K models, employing an advanced EO guidance replacing earlier television (B) and IR (G) seekers.

The U.S. Air Force will receive up to 450 refurbished and new Maverick air/ground guided missiles, fitted with semi-active laser (SAL) guidance kits. The missiles are to be refurbished with the guidance kits by Raytheon, the original manufacturer of the weapon. Under the engineering contract to recently awarded by the U.S. Air Force, Raytheon will restart the production line serving the U.S. Air Force, Navy and international customers. The U.S. Air Force accepted the first AGM-65A Maverick in August 1972. A total of 25,750 A and B Mavericks were purchased by the Air Force. In October 1983 the first AGM-65D was delivered, achieving initial operational capability in February 1986. Three years later, in 1989 the AGM-65G missiles was delivered. Maverick A’s have been phased out of the air force inventory but conversion of phased out A’s and near obsolete B’s into EO guided AGM-65H has been considered in the past, introducing enhanced software-based capability. The Maverick E model is the only version having the laser-guided seeker section. It uses the heavyweight penetrator warhead. The U.S. Air Force and Marine Corps are the users of this variant. The new missiles will be delivered by first half of 2011. Part of the missiles will be upgraded from existing inventories and others will be newly built. “The military is successfully employing laser-guided Mavericks against moving targets and in urban environments,” said Harry Schulte, Raytheon Missile Systems vice president of Air Warfare Systems. “This contract is a win for the warfighters, because it gives them a reliable combat-proven weapon they can take to war almost immediately.”