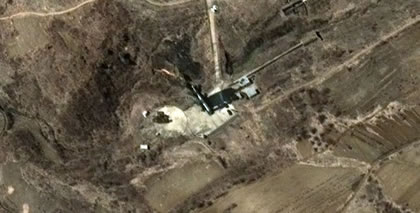 North Korea fired a missile carrying a small satellite over Japanthis morning despite Japanese protests and threats that US ships could intercept the missile on its ascent. Liftoff took place at 11:30 a.m. (0230 GMT) from the coastal Musudan-ri launch pad in northeastern North Korea. As anticipated, the flight path of the new multistage rocket passed northern Japan but didn’t deliver any debris. While Pyongyang declared the launch a success, claiming the satellite has entered earth orbit, U.S. military sources denied this claim saying “no object entered orbit.”

North American Aerospace Defense Command and U.S. Northern Command officials said that the first stage of the rocket fell into the waters between Koreaand Japan, while the two other stages, and its payload, landed in the Pacific Ocean. However,

since the North Korean launch was suspected to be a missile test, the weather the satellite entered orbit or not is meaningless. More important is the fact that North Korea managed to launch a missile that deployed its payload somewhere in the Pacific Ocean, much closer to the Continental USA than ever before.

“North Korea broke the rules once more by testing a rocket that could be used for a long range missile,” Obama said. “This provocation underscores the need for action – not just this afternoon at the U.N. Security Council, but in our determination to prevent the spread of these weapons.”

While Washington and Tokyo are highly alarmed by the Korean act, China and Russia, both sharing land borders with North Korea reacted more calmly, in an attempt to accept North Korea claim that the launch of the “Kwangmyongsong-2” satellite was a successful phase of their ongoing space program. North Korea claimed its participation in a U.N. space treaty protects its right to send a satellite into orbit. Pyongyang took special effort to alert international maritime and aviation authorities of the rocket’s flight path, in marked contrast to 2006, when it carried out a surprise launch.