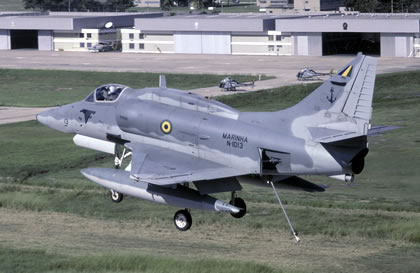 Upgrades Embraer has signed a US$140 million contract to modernize a dozen Skyhawk jet fighters operated by the Brazilian Navy. These include nine AF-1 single-seat fighters and three AF-1A (two-seat) fighter-trainers. This contract is the first large

scale program Embraer has won wit the Brazilian Navy. The Navy currently has an inventory of 23 AF-1 Skyhawks. It followed two successful fighter modernization programs Embraer had with the Brazilian Air Force jets – upgrades of F-5BR fighters and A-1 AMX light attack jets. The 12 naval airplanes that will be modernized will be fully restored to flight condition, to operating with the Navy’s 1st Intercept and Attack Plane Squadron. The program includes restoring the aircraft and their current systems, as well as implementing new avionics, radar, power production, and autonomous oxygen generating systems.