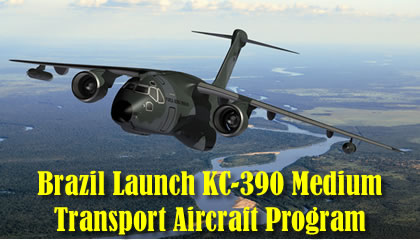 Embraer has signed a US$1.3 billion contract with the Brazilian Air Force (FAB) for the KC-390 military transport aircraft program. In a ceremony held yesterday (April 14) at the LAAD exhibition the Brazilian Air Force (FAB) and Brazil’s aerospace manufacturer Embraer launched the KC-390 medium weight transport aircraft program. The new jet, will replace some 22 Lockheed Martin C-130E/H and KC-130 transport aircraft currently in service with FAB. Like the Hercules, the new transporter will have a cargo bay equipped with an aft ramp capable of carrying about 18 tons of cargo. It will be capable of transporting a wide variety of types of cargo, including armored vehicles. The aircraft will also be configurable for aerial refueling missions. Unlike most current turboprop powered transporters, KC-390 will be powered by two turbofan engines. The new aircraft is expected to enter service in 2015.

The company embarked on the preliminary development of a future medium weight cargo plane in 2007. Frederico Fleury Curado, Embraer President & CEO described the program as a ‘historical strategic partnership’ between the Brazilian Air Force and Embraer, and affirmed his conviction that this “cargo and tanker aircraft for the FAB … shall also become another successful export platform for both Embraer and Brazil.” He indicated that the participation of other countries in this program will be evaluated, in conjunction with the FAB.

The development of KC-390 is based on requirements established by the Air Force, following a process that has been proven to be a successful business formula for Embraer, with earlier programs including the Bandeirante EMB-110 light transport and maritime patrol aircraft, and the Tucano trainer and Super Tucano trainers and light attack aircraft. The conversion of Embraer’s ERJ-145 jet transports to special mission aircraft also originated from a similar cooperation. These aircraft are operated as aerial surveillance and remote sensor platforms, used in the Amazon Surveillance System (Sistema de Vigilância da Amazônia – SIVAM).